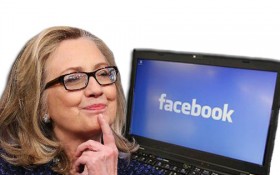 The presidential campaign of former Secretary of State Hillary Clinton is growing more controversial by the day. It seems there’s no limit to what she will do – including using pornography — to stop her opponents.

The Horn News first warned last week that the Clinton campaign was deploying a cyber army to take down her critics online. On Monday, they struck — and their tactics were shocking.

The groups, which collectively contained more than 250,000 members, included Bernie Sanders Activists, Bernie Believers and Bernie Sanders Is My Hero. And they were all temporarily shut down — silenced in a huge attack just a day before five crucial primaries.

Facebook users reported that the groups had been infiltrated, and hackers were posting pornographic material — including some that may have been of underage children. This led to a slew of complaints, including some from unwitting Sanders supporters, that caused the groups to be suspended.

The spam and pornography reports caused the groups to be flagged and temporarily removed while Facebook investigated, leaving a quarter-million Sanders’ supporters unable to communicate just hours before Super Tuesday, when Democrats in five states headed to the polls.

There have been accusations that the attack originated from the Facebook group “Bros4Hillary,” where members posted bragging about anonymously reporting Sanders’ groups for containing “credible threats of violence.”

Pictures, shown by Paste magazine, offered a glimpse as other group members cheered each other on and encouraged the false flagging of Sanders’ groups.

Just four days prior to the attacks, The Horn News reported the Clinton SuperPAC Correct the Record was investing more than $1 million into activities to shut down any social media posts that were negative of Clinton.

Although the attacks on Sanders’ Facebook groups were highly coordinated, Correct the Record has denied any involvement.