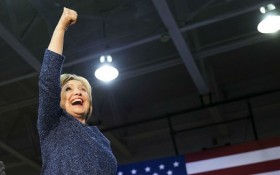 A Clinton SuperPAC, Correct the Record, has announced a controversial new plan — they are investing a huge amount of money to silence and attack anyone critical of Clinton online.

They plan to grow their paid army of virtual Thought Police, who — with Clinton volunteers and staff — will scour through individuals’ Facebook, Twitter, and other social media posts and shut down anything negative of Clinton.

If they can’t change voters’ minds, they plan to silence their voices.

According to their press release, Correct the Record is planning to pump big money into the operation.

“Correct The Record will invest more than $1 million into Barrier Breakers 2016 activities, including the more than tripling of its digital operation to engage in online messaging both for Secretary Clinton and to push back against attackers on social media platforms like Twitter, Facebook, Reddit, and Instagram,” their release said.

The Clinton SuperPAC has been accused of using loopholes to avoid FEC and campaign laws in the past. According to The Daily Beast, “Due to FEC loopholes, the Sunlight Foundation’s Libby Watson found this year that Correct the Record can openly coordinate with Clinton’s campaign, despite rules that typically disallow political campaigns from working directly with PACs.”

Correct the Record “was created in May of last year when it was spun off from the American Bridge SuperPAC, which is run by longtime Hillary and Bill Clinton supporter David Brock. Brock also founded the left-wing media watchdog website Media Matters for America,” The Daily Beast reported.

And Clinton’s Internet hit squad is already hard at work.

The task force has “already addressed more than 5,000 individuals who have personally attacked Secretary Clinton on Twitter,” Correct the Records announced.

This isn’t the first time the Clinton campaign has come under criticism for their controversial online tactics. In March of last year, New York Times reporter Amy Chozick revealed a threatening email warning her not to use certain words when speaking about Clinton.

A group called HRC Super Volunteers just warned me “We will be watching, reading, listening and protesting coded sexism…” (1/2)

“You are on notice that we will be watching, reading, listening and protesting coded sexism…” the email reads.