Op-ed: Taking time to remember our veterans - The Horn News 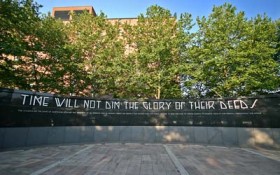 Every day on my walk into the office in Baltimore, I see the same stone memorial.

Until yesterday, I had never bothered to stop and acknowledge the significance of it.

As far as war memorials go, this isn’t the prime tourist destination of my city. It’s a nice, but small and slightly tucked back memorial just outside of Baltimore’s Camden Yards stadium – built after the city tore down the Orioles old Memorial Stadium, as a way to continue to honor our nation’s veterans.

It exists only as a reminder to all who pass by.

That’s about all it says. Just a reminder, simple as that. A simple reminder that – I admit — is easy for folks like me to ignore during my everyday routine.

Hundreds of people walk by it every day. Thousands, when there’s a baseball game in town. Like me, every day in our country, Americans are consumed with a mountain of work to tackle, remembering to pick up the kids from daycare, getting groceries and paying bills, swing by the dry cleaners, mowing the lawn, taking out the trash.

It seems these days there are many important things to do, and seemingly little time to do it.

But yesterday, I stopped. I noticed. And I took a moment to consider what the memorial really says.

The beauty of such a monument is hidden in its simplicity. It is a reminder of what is truly important.

It was intentionally set back from the walkway — designed to be more silent than loud.

It’s a quote from General John J. “Black Jack” Pershing, the leader of the American expeditionary force in France in World War I.

And it exists only as a quiet reminder to our nation.

A tribute to every American warrior who has taken up arms in defense of our nation.

The memorial is stony-faced. Silent, and often alone. Appreciated, but largely overlooked during the day-to-day hustle and bustle.

To really see it, you have to step out of the normal flow of traffic. You have to stop your everyday routine for just a moment, and step into the memorial.

A haunting reminder of the tremendous sacrifice the heroes of democracy have given. Of the cruel altar thousands of our nation’s bravest have laid their bodies upon in sacrifice for our grand democracy.

We live in a free republic, whose future is decided by the will of “We the People” – free from kings, dictators and the tyranny that is so common in the man’s history. We live in peace and prosperity.

Because they only serve as our watchful, silent sentinels – ever on guard.

Like this memorial, our soldiers and veterans are not flashy. They do not demand our fealty or obedience.

They often do not get even our attention.

Still, they dutifully board ships and planes and travel thousands of miles to die on strange lands. They sacrifice in silence as our shield bearers; brave souls who cross the globe to do battle and ensure our enemies’ spears cannot reach the heart of America.

Like the knights of myth, they don their armor and ride off to slay the dragons in their caves.

They do all of this, and often these deeds fail to demand our attention. There’s no pep rally at the local high school, or evening news update anymore.

They exist in our lives, but not in our way. They are our eternal sentinels, always standing guard. Always facing outward. Always.

Those words ring true. Time will not — cannot — dim their glory, as long as Americans give a moment to honor them.

To honor their courage. Their sacrifice. And their commitment to freedom and democracy so strong, they are willing to leave their families knowing they may never come home – and knowing they are too often ignored.

The citizens of the State of Maryland dedicate this memorial to all veterans who so valiantly fought and served in our nations wars with eternal gratitude to those who made the supreme sacrifice throughout the world.

Stephen Dietrich is the Managing Editor of The Horn News, and is a veteran of the Iraq War