[Exclusive] Iran making ISIS stronger than ever - The Horn News 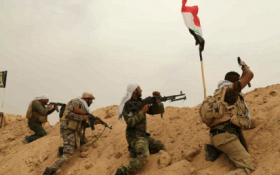 The Iraqi military campaign to recapture Mosul “has bogged down,” Secretary of State John Kerry told reporters in Baghdad Friday. The slow pace of the Iraqi Army to recapture territory south of Mosul lost to ISIS two years ago drawn increasing public criticism.

Iranian-backed Shia militias are at least partly to blame. And their presence may, in fact, be strengthening ISIS.

“The Shia militia have Iranian agendas and are killing many people,” according to Col. Tariq Ahmed Jaff, deputy commander of the Peshmerga’s 9th Combat Brigade in Kirkuk.

On Thursday from the governor of the Nineweh Province, Nofal Sultan, who told BasNews, a Kurdish media outlet, that the Iraqi forces are pushing forward slowly compared to the huge size of the forces deployed to the area.

“If it takes so long to recapture a small number of villages, then how long it may possibly take to recapture the entire city of Mosul?” he said in exasperation.

Sultan has a point: the see-saw battles between the Army and ISIS in recent weeks portend a struggle that could go on for a year. He also complained of a shortage of armored vehicles and heavy equipment.

But another problem, which he didn’t mention, is the fact that the Shia officers and soldiers don’t just lack the motivation to put themselves at risk to rescue a city of Sunni citizens — their ethnic rivals — from ISIS. Their presence may be strengthening the terror group.

“Recapturing Mosul is a task the Iraqi Army is not ready to do, it may also be one they don’t want to do,” according to Michael Pregent, a career military intelligence specialist serving as an adjunct scholar at the Hudson Institute.

“An invading force of Shia Iraqi Army with PMUs (Hashd al-Sha’abi) carrying Shia Militia flags and the Iraqi Flag while yelling Shia battle cries could have the effect of pushing Sunnis who do not support ISIS into armed resistance.” says Pregent.

By any standard the array of sectarian and ethnic armies in Iraq inching toward full confrontation in Mosul is complex. The city is held by the international brigades of ISIS recruits from more than a dozen countries. “They have been calling in every available fighter in the region to defend the city against an assault that the Iraqi government promises will start no later than May,” according to Ali Awni, a Kurdish official who serves on the board of the Shekhan District 25 miles north of Mosul.

Most of the ISIS fighters, who number between 4,500 up to 6,000 are a mix of foreign fighters “who don’t what to be there” and conscripted Mosulawis “who are forced to join ISIS but who will fight to keep Mosul from falling under Shia control” says Pregent.

At the Makhmour front 40 miles south of the city of one million people, two brigades of the predominately Shia 15th Iraqi Army division have been lurching forward to recapture abandoned villages held by ISIS fighters since March 24. After the recapture of four villages March 25, ISIS counter-attacked on April 5 killing 20 Iraqi army soldiers and pushing the army out of the village of Al Nasr which had been claimed a week earlier. Awni says the Shia militia abandoned large quantities of guns and ammunition to the ISIS, fighters, which recalled the ignominious retreat of the Iraqi Army from Mosul in June, 2014.

The Iraqi army counts on close air support of Coalition aircraft and includes units of Kurdish Peshmerga and some Sunni Tribal fighters from the area, according to the Washington-based Institute for the Study of War.

Until now, the Baghdad government has kept the Iranian-backed PMU out of the Mosul campaign for fear of antagonizing the Mosul residents, many of whom see Shia as mortal threats. In Kirkuk, 40 miles east of the Iraqi army, however, Peshmerga commanders met on recently with military leaders of the Popular Mobilization Units, which are Hashd al-Shabi Shia militia armed and staffed by Iranian Badr Corps and Quds Force officers, and which are feared by Kurds and Sunni citizens alike. The PMU, said to be more than 30,000 in number, include rogue militia and have a reputation for looting and extrajudicial killings, according to Awni.

To the west of Mosul in the Yezidi heartland of Sinjar Mountains, local officials have moved to stop the Hashd Al-Shabbi militia from using a Yezidi militia several thousand strong as its proxy, according to Bas News, a Kurdish media group. The mayor of the Yezidi city of Sinjar announced Monday that only Peshmerga of the Kurdish Regional government could operate in the area.

“There have been occasional reports of armed Shia infiltration, including Quds, into Kirkuk. That is a highly provocative act on the part of Tehran,” says Ernie Audino, a retired U.S. Army brigadier general and a Senior Military Fellow at the London Center for Policy Research.

“Now that Iran has emerged as the dominant power in the Gulf, Tehran’s support, influence and control of the Abadi Regime and the Shia militias cannot be ignored. In fact, much of the Sunni Arab support for ISIS is motivated by a fear of increasing Shia dominance across the Gulf.”

Douglas Burton is a former foreign service official in Iraq and reports from Washington, D.C.