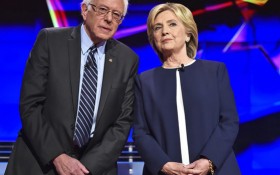 With a massive delegate lead and a recent string of primary wins, former Secretary of State Hillary Clinton is trying to unite Democrats behind her candidacy.

But liberal insiders are worried that the Democratic party is in the middle of a civil war that’s gotten so nasty it could ultimately cost Clinton the White House.

According to a recent WSJ/NBC poll, one-third of Democrats currently supporting Clinton’s opponent, Vermont Sen. Bernie Sanders, say they will refuse to vote for Clinton in the general election.

Sanders voters view her as the embodiment of the establishment, according to the Wall Street Journal, and 32 percent think very negatively of her.

These voters may be more likely to support a third-party candidate, polls show, and splitting the Democratic vote would leave Clinton unable to win the White House.

Meanwhile, Sanders says he still maintains a “path toward victory” in his Democratic presidential bid against Clinton, and is rejecting suggestions that she has all but won the party’s nomination.

“I don’t believe they have an insurmountable lead,” Sanders said Thursday in a phone interview with from Arizona, where he was campaigning. “Secretary Clinton has done phenomenally well in the Deep South and in Florida. That’s where she has gotten the lion’s share of votes. And I congratulate her for that. But we’re out of the Deep South now.”

He predicted the upcoming calendar of races in several Western states, including Arizona and Washington, and April contests in Wisconsin, New York and Pennsylvania would offer him the chance to catch up.

“We think from now on out, we are having states that, everything being equal, we stand a chance to do well in. We think we have a path toward victory,” he said, pointing to California’s June primary. “We’ve got some big states coming up and we think if we can do well, if we go into the convention with delegates, we’ve got a shot at taking the nomination.”