March Madness lives up to its name. What happened, and what to watch for today - The Horn News 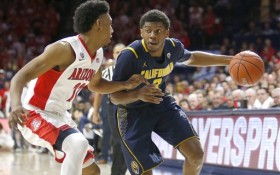 Looking ahead to Friday’s NCAA Tournament action and the best of Thursday’s games:

One of the most intriguing issues in Friday’s NCAA Tournament action is how California will respond after two major losses in the last few days.

“It’s been a rough week for the team and everything,” California guard Jabari Bird said. “But we have had up-and-downs throughout the whole entire year, so it’s nothing new for us. The main thing is putting it behind us and focusing on (Friday’s) game.”

The Golden Bears announced Thursday that Wallace is expected to miss three to five weeks, which would keep him out for the remainder of the season. Wallace averages 15.3 points, 5.4 rebounds and 4.4 assists per game.

The Hufnagel firing could have bigger long-term implications. California announced Wednesday that it is reviewing whether head coach Cuonzo Martin correctly handled the allegations against Hufnagel.

Maryland has reason to feel very wary as the No. 5 seed in the West Region heading into Friday’s game with No. 12 seed South Dakota State.

No. 12 seeds won two of their three matchups with No. 5 seeds on Thursday to continue an NCAA Tournament tradition. Yale upset Baylor 79-75 and Little Rock edged Purdue 85-83 in double overtime. Of the three No. 5 seeds to play Thursday, the only one to survive was Indiana, which trounced Chattanooga 99-74.

Villanova wants to shed its reputation as an NCAA Tournament underachiever.

The Wildcats were a No. 1 seed last season and a No. 2 seed in 2014 but lost in the round of 32 both years. They’re a No. 2 seed in the South Region and face UNC Asheville on Friday at Brooklyn, New York.

Villanova hasn’t advanced beyond the tournament’s first weekend since reaching the Final Four in 2009.

“We can’t really harp on the past so much,” Villanova forward Daniel Ochefu said. “I think we’ve done a great job of eliminating that from our memories.”

Apparently all it takes for Oregon State to reach the NCAA Tournament is to have a Gary Payton on the roster.

Payton’s son, Oregon State senior Gary Payton II, is the only Division I player to average at least 15.5 points, 7.5 rebounds, 5 assists and 2.5 steals per game. Payton said his dad will attend Friday and has given him some advice on what to expect.

“He just told me just to play my game, don’t let everything outside the court get to me,” Payton said. “It’s going to be a little crazy, a little havoc just because our program hasn’t been here in a while and we’re getting back here for the first time. So he said just treat it like a regular game, any other ordinary game.”

Yale’s upset of Baylor and Texas Tech’s loss to Butler on Thursday continued the recent NCAA Tournament struggles of teams from the state of Texas.

DRINK UP, TONY! (BUT ONLY FROM AN NCAA-APPROVED CUP)

The top priority for Virginia between now and Saturday has to be making sure coach Tony Bennett drinks plenty of water.

In the only thing resembling a scare for the Cavaliers in their first-round 81-45 rout of Hampton, Bennett collapsed in the final minute of the first half. Bennett said after the game he “blacked out” and became light-headed due to dehydration.

Bennett wound up being well enough to coach the second half and was a good sport about it afterward, with forward Anthony Gill saying he prayed for his coach, then joking that “I healed him.”

The Cavaliers will need Bennett at his lubricated best Saturday when they figure to get more of a test from ninth-seeded Butler in the second round.

The most interesting postgame press conference exchange of the tournament’s opening day came when a reporter asked Baylor’s Taurean Prince how Yale had out-rebounded the Bears.

Prince’s response: “Um, you go up and grab the ball off the rim when it comes off, and then you grab it with two hands, and you come down with it, and that’s considered a rebound. So they got more of those than we did.”