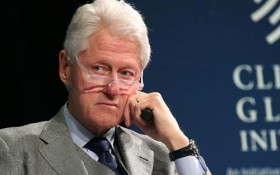 Now, nearly 112,000 citizens have signed a petition calling for the arrest of her husband Bill Clinton for election fraud they allege helped her steal victory in the state.

Like most Clinton political affairs, her narrow win in the Bay State — a barely 1% margin over Vermont Sen. Bernie Sanders — wasn’t without controversy.

In response, outraged citizens have started a petition calling for the arrest of the former president “for clear, knowing and egregious violation of the campaign laws to swing an election in a significant way.”

“Choosing the critical battleground state of Massachusetts, Bill Clinton should immediately be subject to arrest and prosecution. Bill Clinton was not only electioneering within the boundary. Although the spokesperson for Bill Clinton denies that he was ever inside a polling place, photos and video show him clearly greeting and talking up election workers inside.

After being told to refrain from this activity, which is a 3rd degree Voter Violation Felony, for which Clinton indeed must have known the law and chose to violate it, Bill Clinton does not vote in Massachusetts, and would have no other business in a polling station on election day besides campaigning for his wife.

We, the undersigned, respectfully ask that you honor the democratic process with all the dignity it deserves, and hold Bill Clinton accountable for the felony of his actions.”

As of Monday, Mar. 7th, the petition had gathered significant support from both conservatives and Sanders’ supporters, with just under 112,000 signatures at press time.

The petition also points supporters toward a WhiteHouse.gov petition and notes that, should it receive 100,000 signers on that page, President Barack Obama would be personally delivered the petition and his administration would be forced to publicly address the issue.

As of the writing of this article, the White House petition has over 14,000 signers.