NRA chief: Clinton should "scare the hell out of all of us" - The Horn News 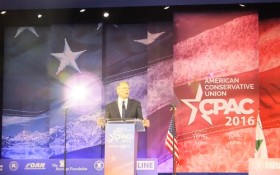 The National Rifle Association (NRA) had a clear message for former Secretary of State Hillary Clinton leading up to the 2016 presidential election: “Bring it on.”

That’s what Wayne LaPierre, the executive vice president of the NRA, told an enthusiastic crowd at the Conservative Political Action Conference (CPAC), the nation’s largest gathering of conservatives, yesterday.

Under President Bill Clinton’s guidance in the 1990’s, warned LaPierre, lawmakers had a history of attacking gun owners and pushing for restrictive laws that gut America’s Second Amendment.

And LaPierre said Hillary Clinton would continue that tradition, and that the thought of her as America’s next president should “scare the hell out of all of us.”

“As we sit in this room, it’s deja-vu all over again. Same old Clintons, same old message.”

But LaPierre’s message wasn’t merely a warning. It was also a challenge. As the NRA chief continued, he issued a personal message to Clinton.

“Mrs. Clinton, if you want to come after the NRA and fight over the God-given rights of America’s gun owners… if you want to turn this election into a bare-knuckle brawl of our constitutional freedom, bring it on,” LaPierre said to cheers from the crowds.

LaPierre continued, “Come November, we’re bringing the fight to you. All of us here today and all over our country have a common cause. We can, and we must, fight for it.”

“This is our election. And we’re taking our country back.”