Labor unions made billions off Scalia's death - The Horn News 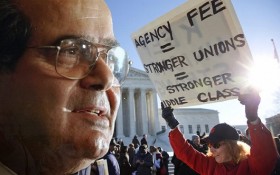 Some of the largest unions in the country are reaping an unexpected billion-dollar windfall after the sudden and unexpected death of Supreme Court Justice Antonin Scalia.

And these unions, which spend a fortune electing labor-friendly candidates, will have their coffers full heading into the tightly contested 2016 election cycle.

Without Scalia’s deciding vote, the United States Supreme Court is now tied between liberal and conservative justices — and for public-sector unions, and the 2016 Democratic presidential candidates they financially support, the timing couldn’t have been more convenient.

The sudden shift in the high court’s voting politics comes just weeks before it was to rule on a case regarding the legality of public-sector unions’ dues collection process.

Legal scholars believe the high court was set to rule against the unions 5-4, and Scalia would likely have cast the deciding vote.

That decision would have dealt a serious blow to Big Labor’s money making efforts, and could have bankrupted some unions. But without Scalia’s vote, these huge unions that represent teachers, firefighters, and other government employees are set to continue to rake in billions in dues over the next few years… even if their members don’t want to pay them.

The Supreme Court is considering whether government workers who choose not to join a union can be required to nevertheless pay fees that cover collective bargaining.

The high court heard arguments in January in a California case brought by a group of public school teachers who claim such mandatory fees violate the First Amendment rights of workers who disagree with the union’s positions.

Unions feared the potential loss of huge amounts in fees could have significantly reduced their power in the political arena. But with Scalia out of the picture, that doesn’t appear to be a concern any more.

While half the states already have right-to-work laws banning mandatory fees, most members of public-employee unions are concentrated in more liberal-leaning states that don’t, including California, New York and Illinois.

The lead plaintiff in the case is Rebecca Friedrichs, a public school teacher in Orange County, California, who says she left the California Teachers Association after becoming disillusioned with its mission. She wanted the high court to overturn a 39-year-old ruling that said states can require non-members to pay “fair share” fees.

That 1977 case, which involved a group of Detroit schoolteachers, said the fee system prevents non-members from “free riding,” since the union still has a legal duty to represent all workers.

The high court had previously raised doubts about the viability of the ruling in two recent cases, but has stopped short of overturning it.

Opponents of the fee system wanted the justices to essentially convert those more liberal states into de-facto right-to-work states for public employee unions, where workers still covered by the union can pay nothing at all.

The challengers in California say it’s impossible to separate politics from the bread-and-butter workplace issues on which unions spend money.

Before Scalia’s untimely death, it looked like the court was heading in that direction and would have seriously weaken labor unions that tend to overwhelmingly support Democratic candidates and policies.

Roughly half of all union members are government workers. About 36 percent of public-sector employees are in a union, compared to just 6.6 percent of private-sector workers.