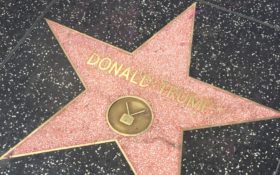 Unhinged leftists can’t beat President Donald Trump politically – so they’re taking out their frustration on his star on the Hollywood Walk of Fame.

At least 10 times, left-wing activists have broken the law and vandalized Trump’s the star.

Trump was awarded the star on the famous Hollywood walkway on January 16, 2007 – as a producer of the Miss Universe pageant, host of “The Apprentice” and guest star in “Home Alone 2.”

That honor drives leftists crazy – especially Hollywood elites who are used to having the town all to themselves.

Last Tuesday, July 10, unfunny liberal comedian George Lopez pretended to urinate on Trump’s Hollywood star, taking out a water bottle and pretending to pee on the sidewalk. Lopez hates the president so much that one of his raging anti-Trump rants got him booed off the stage recently.

During the Resist March in June 2017, protesters stuck stickers all over Trump’s Hollywood star, accusing the president of the unforgivable Hollywood sins of “transphobia,” “racism,” and “ableism.”

In May 2017, someone placed a golden toilet bowl on Trump’s Hollywood star. The broken tank told passersby they should “Take a Trump.”

In October 2016, two weeks before the 2016 presidential election, a man dressed as a city construction worker smashed the star with a sledgehammer. The man, James Otis, later told “Deadline Hollywood” that he intended to remove and sell the star – and give the proceeds to the women who accused Trump of sexual harassment. The following February, Otis was convicted of a felony charge of vandalism and received three years’ probation and a total of $4,400 in fines.  Otis could have saved himself the trouble – Trump’s accusers were paid by Brave New Films, which was paid by George Soros.

Just days before Trump accepted the 2016 Republican presidential nomination, someone built a miniature, 15-centimeter-high “Wall” around Trump’s star. The wall was topped with American flags, razor wire, and a message to keep out. “I knew this week was the Republican convention and I suppose I was capitalizing on the momentum of the convention,” said the L.A. street artist who built it, who calls himself Plastic Jesus. “In the U.S. you’ll interact with immigrants from all over the world, and it’s one of the things that makes the U.S. so great.” But American voters preferred the real wall instead.

In April 2016, someone drew a “mute” symbol on the star – asking if Trump could be silenced. It turned out the vandal was Norwegian “artist” Pobel, whose stencil worked was wiped clean.

In March 2016, someone scrawled “Don’t Vote” all over Trump’s Hollywood star. The vandal didn’t need to worry; Trump had little support in Tinsel Town and lost California by a lopsided margin. But Trump won 2,626 counties nationwide to Hillary Clinton’s 487.

In January 2016, someone painted a swastika on the square – but they painted it backwards. Cleaning crews scrubbed off the swastika almost immediately.

In September 2015, someone painted a yellow “X” over his star, crossing his honor off the sidewalk.

There have been so many assaults on the defenseless star that the Hollywood entertainment rag Vanity Fair wrote, “People Can’t Stop Vandalizing Donald Trump’s Star on the Hollywood Walk of Fame.”

Since all these efforts failed to remove the star, in 2016 a petition used these acts of vandalism as a pretext to have the star ripped out of the sidewalk.

“Donald Trump has a star on the Hollywood Walk of Fame and it has been vandalized again and again since the start of his presidential campaign,” the petition, which garnered more than 13,000 signatures, said. “It’s clear that the community does not think he deserves to be represented there.”

To its credit, the Hollywood Walk of Fame refused to bow to the pressure.

“The Hollywood Walk of Fame is a registered historic landmark,” said Leron Gubler, the president and CEO of the Hollywood Chamber of Commerce. “Once a star has been added to the Walk, it is considered a part of the historic fabric of the Hollywood Fame. Because of this, we have never removed a star from the Walk.”

Instead, he had a simple solution for the petitioners: Just stop breaking the law.

“The Hollywood Walk of Fame is an institution celebrating the positive contributions of the inductees,” said Gubler. “When people are unhappy with one of our honorees, we would hope that they would project their anger in more positive ways then to vandalize a California state landmark.”

If you get a chance, check it out. Trump’s star is located at 6801 Hollywood Blvd. near the Dolby Theatre.