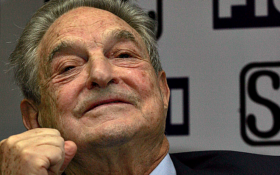 The latest round of sex scandal accusations against President Donald Trump are being brought to you by a socialist propaganda mill that does “get-out-the-vote” work for the Democratic Party – and gets seven-figure checks from liberal billionaire George Soros.

During the heat of the presidential election, a handful of women came forward at just the right time to accuse Trump of sexually harassing them. The Trump campaign provided eyewitnesses who disputed their decades-old accounts, and the stories died down.

Now they’re roaring back – on TV, on the internet, and probably soon on the campaign trail – and Soros and other deep-pocketed liberals are paying for their stories to go viral.

Three of the women – Rachel Crooks, Samantha Holvey, and Jessica Leeds – told NBC News’ Megyn Kelly that they failed to stop Trump from being elected last year. But they hope the post-Weinstein, #MeToo movement will let them score a knockout punch this time.

As soon as they finished the interview, the trio walked off to a press conference to present their viral YouTube video: “16 Women and Donald Trump.”

But the first person to speak about women’s rights and misogyny was a man: Robert Greenwald, who runs the company behind the video.

He painted himself and BNF as the underdog in a David-and-Goliath fight against the billionaire president.

When he made this movie, he said, “We financed it through donations from our thousands of supporters, from five to 50 dollars.”

Greenwald claims to make documentaries, but that statement belongs in a sci-fi movie… because it’s total fiction.

Greenwald’s firm takes in millions from the wealthiest left-wing foundations and donors in the country.

It’s easy to figure out… once you follow the money.

According to its annual report, $2.38 million of Brave New Film’s $2.57 million budget came from “foundations” and “major gifts.” So much for fives and fifties.

That’s not to mention $4.2 million from the liberal Ford Foundation and $363,342 from the far-Left Tides Foundation.

Brave New Films is also one of 40 left-wing media groups that belongs to a group known as the Media Consortium.

BNF specializes in making Michael Moore-style “documentaries” about the people its donors hate the most. Its credits include:

In other words, you supply the target, and BNF will produce a professional smear job – for a fee.

BNF produced five “GOTV” videos in 2016. Its annual report brags that BNF’s “strategy to mobilize the Latino vote proved impactful.” Half of the eight states where they campaigned supported Hillary.

BNF – and its big-money liberal funders – see this movie as just another anti-Trump campaign tactic.

Greenwald didn’t say how much of that he gave to the 16 women in his documentary. But BNF spent a staggering $2.2 million last year on its productions.

Whatever money those women received for making allegations against Trump came from George Soros and his cronies.

Whoever funded it, the White House denies everything. A Trump spokesperson said the video spread “false claims, totally disputed in most cases by eyewitness accounts.”

“The timing and absurdity of these false claims speaks volumes, and the publicity tour that has begun only further confirms the political motives behind them,” the Trump White House added.

But if George Soros is paying, you probably shouldn’t buy it.

—Frank Holmes is a reporter for The Horn News. He is a veteran journalist and an outspoken conservative that talks about the news that was in his weekly article, “On The Holmes Front.”