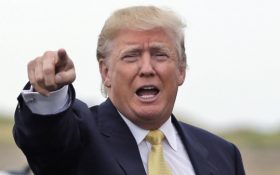 He’s a global icon and on his way to becoming the next president of the United States.

But even though Donald Trump has spent decades in the spotlight, there’s still plenty about his life that many people don’t know.

We put together this list of 10 surprising facts. Check them out and tell us how many you already knew.

When Donald Trump gives a toast at a state dinner, don’t be surprised if it’s sparkling grape juice in his glass. Because The Donald doesn’t drink… ever. Aside from being famously disciplined, Trump lost a brother, Fred, to alcoholism. And that was plenty of motivation for Trump to keep booze out of his life.

Trump’s opponents have called him a racist and claim he can’t draw support from African Americans. But Charles Evers — a civil rights icon and brother of the legendary Medgar Evers — has come out in support of Trump. Evers claims a businessman like Trump is the right person to bring jobs to Evers’ home state of Mississippi.

#8 Trump was a wiz on the baseball diamond

We all know Trump is an avid — and accomplished — golfer. But he was actually a three-sport athlete at the New York Military Academy, playing soccer, football, and baseball. And a former classmate claimed Trump was good enough at baseball to play professionally. When Trump throws out first pitches as president, expect him to bring some heat.

#7 And he was good at fake sports, too

Believe it or not, Trump has actually been enshrined in the World Wrestling Entertainment (WWE) Hall of Fame. Trump had a famous bet with WWE honcho Vince McMahon where the loser had to shave his head. Trump won and his precious locks remained intact.

#6 Not every Trump deal was a winner

Trump’s repeatedly been willing to show his fun, lighter side. And there may be no better example than his funny (and slightly bizarre) Trump: The Game. The Monopoly-inspired board game was released in 1988 and wasn’t as successful as other Trump licensing deals. But if you can’t get enough of Trump, you can still pick up the game on eBay as a collector’s item.

#5 Bill Maher learned not to mess with Trump

When Trump was raising the issue of whether President Barack Obama was born in America, talk show host Bill Maher decided to have some tasteless fun at Trump’s expense. Maher offered $5 million if Trump could prove he wasn’t fathered by an orangutan. When Trump immediately produced his own birth certificate and came collecting, Maher welched. Trump sued to collect — and although Trump eventually dropped the litigation, Maher learned a valuable lesson about messing with The Donald.

We’re going to give Trump a pass on this one. As the saying goes, you can lead a horse to water… We’re guessing the pet tigers and other items Tyson squandered his fortune on weren’t recommended by Trump.

In the 1980s, the famous Wollman Rink in New York City’s Central Park was in serious trouble. Renovations were six years overdue and way over budget. Trump put up the money to fix the rink himself — and had the project done under budget in three months. It’s one of the stories that cemented Trump’s legacy as a New York business legend.

If Trump wins in November, he’ll join Ronald Reagan as the only presidents with stars on the Hollywood Walk of Fame. He earned the honor for his hit television show “The Apprentice,” another Trump success.

#1 Trump and Obama could have been golfing buddies

Trump once famously offered to give President Obama free golf for life at all Trump courses. All Obama had to do was quit the presidency. It’s one deal Trump didn’t get done — and it’s a shame for all of us.