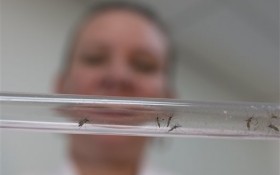 Florida has found the Zika virus in three groups of mosquitoes trapped in Miami Beach — the first time this has happened in the continental U.S. — and authorities are blaming a particular flower for making mosquito control much more difficult.

One of the traps that tested positive was at the Miami Beach Botanical Gardens, where bromeliads bloom. The plants trap standing water in their cylindrical centers, providing excellent breeding areas for mosquitoes amid their colorful flowers and pointy leaves.

“Everyone should know by now that bromeliads are really problematic for us. These are probably the number one breeding area for mosquitoes,” said Miami-Dade County Mayor Carlos Gimenez.

He said Miami Beach is removing all bromeliads from its landscaping, and urged residents across the county to either pull them out or rinse them after every rain. Earlier this week, officials removed two truckloads of bromeliads from the botanical gardens, which remains closed.

And with Hurricane Hermine bringing much more rain to Florida, Gov. Rick Scott on Thursday ordered the county to immediately conduct aerial spraying by helicopter as recommended by the CDC.

The Zika-carrying mosquitoes were trapped in a touristy 1.5-square-mile area of South Beach identified as a zone of active transmission of the virus, the Florida Department of Agriculture and Consumer Services said in a news release.

“This is the first time we have found a Zika virus positive mosquito pool in the continental United States,” confirmed Erin Sykes, a CDC spokeswoman.

Finding the virus in mosquitoes has been likened by the U.S. Centers for Disease Control and Prevention to finding a needle in a haystack, but the testing helps mosquito controllers target their efforts, and it confirms that the insects themselves, in addition to infected humans, have begun transmitting the virus inside the mainland United States.

The illness spreads from people to mosquitoes to people again through bites, but the insects do not spread the disease among their own population, and their lifespan is just a few weeks.

A poll released Thursday suggests nearly 48 percent of Americans are wary of traveling to U.S. destinations where people have been infected with Zika through mosquito bites.

Most of the Zika infections from Florida mosquitoes have been in the Miami area, not the tourist mecca of Orlando and its Walt Disney World, Universal and SeaWorld theme parks.

Officials said they are not considering asking restaurants and bars in the area to temporarily close outdoor dining areas, but they will increase spraying, trapping and testing.

“This is a very, very difficult mosquito to control,” said Gimenez. “The CDC director once told me this is the cockroach of mosquitoes, that it will find a way somehow to breed.”

Since July, authorities have linked a couple dozen Zika cases to transmission in small areas of Miami’s Wynwood district and the popular South Beach neighborhood of Miami Beach. Other isolated cases not linked to travel outside the U.S. also have been confirmed elsewhere in Miami-Dade county, as well as in neighboring counties and in the Tampa Bay area, totaling 49 for the state.

A third of people surveyed in the poll believe Congress should make approving more funds to combat Zika a top priority. President Barack Obama proposed $1.9 billion in emergency funding for Zika in February, but Congress has been unable to agree on a final bill.

Scott, a Republican, has repeatedly called on Congress to send the president a Zika funding bill, saying “we still need the federal government to show up.”

In Washington, U.S. Health and Human Services Secretary Sylvia Burwell expressed frustration that Congress hasn’t acted. She’s been forced to take from other health priorities to fund the fight against Zika, and said that stopgap funding will run out at the month’s end.

“The money that’s running out is the tide-over money we have taken from other (priorities),” Burwell told reporters. “What we need is a bipartisan agreement.”

That is how previous Congresses handled earlier public health emergencies such as bird flu and Ebola. Burwell said any Zika bill has to make special provision for Puerto Rico, which has been most severely affected.

“Yes, we will be asking the federal and state government for additional funds as we move on in the fight against Zika, but it doesn’t mean we will be stopping any of our efforts,” while we wait to be reimbursed, said Gimenez.