YouTube sensation charged for his fame - The Horn News 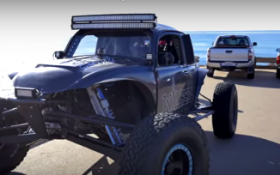 The driver of a souped-up Volkswagen who jumped embankments, spun out in parking lots and tore through San Diego neighborhoods in an online video seen by more than a million people has been sentenced to 45 days in jail.

Wilkey was seen grinning in the 4 1/2-minute video posted on YouTube in January.

The 27-year-old gunned the gray off-road vehicle through downtown, Ocean Beach and other areas, spinning out and catching air as amazed and enraged residents looked on.

At the end of the video he stops at a drive-through restaurant for an ice cream cone.