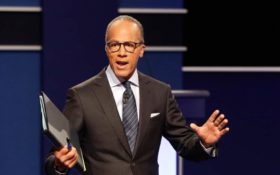 Things are not going well for NBC Nightly News. Despite the much-anticipated Winter Olympics surrounding their nightly coverage, ABC’s “World News Tonight with David Muir” has overtaken the top spot in the ratings.

It has NBC executives panicking — and there’s speculation it may end with the removal of Lester Holt, NBC News’ top primetime anchor.

According to The New York Post, “with Muir passing Holt in overall audience and closing the gap in the all-important 25-to-54-year-old demographic, Holt’s bosses at NBC are beginning to sweat.”

Insiders say the nervousness has increased tensions among different camps within NBC. Internal rivals to Holt are rumored to be jockeying for his position.

Brian Williams, whom Holt replaced in 2015 after Williams was caught lying about a helicopter incident during the Iraq War, has seen his ratings soar since taking over the 11:00pm EST time slot at MSNBC.

Additionally, “Today” show star Savannah Guthrie “would absolutely be a contender [for  Holt’s job],” an insider told The Post.

The only mega star at NBC that wouldn’t be considered?

Former Fox News host Megyn Kelly, who continues to struggle with her own low ratings.

Why do YOU think NBC News is failing?