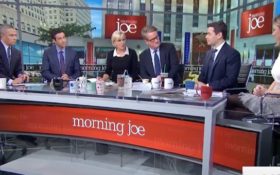 NBC News has gone through a rocky few weeks. Just days after host of the “Today” show Matt Lauer and MSNBC reporter Mark Halperin were fired, another network star — and regular MSNBC “Morning Joe” contributor — is now out of a job.

Harold Ford Jr. will no longer be a contributor on MSNBC’s “Morning Joe” program after allegations of sexual misconduct against him surfaced. In fact, Ford — a former Democratic congressman from Tennessee turned Wall Street insider — is no longer welcome into the studio.

The announcement comes a day after Ford was fired from his lucrative position at financial giant Morgan Stanley amid a report by The Huffington Post that a woman alleged that Ford forcibly grabbed her several years ago, engaging in harassment and intimidation.

Ford denied the allegations and said he planned on bringing legal action against the reporter who made the claims and Morgan Stanley for improper termination.

Ford comes from a highly prominent Democratic family. His father, Harold Ford St., was a Congressman for 22 years; Ford replaced his father as Tennesse’s 9th district representative in 1997 and served until 2007.

Ford entered the private sector following a lost bid for a Senate seat in 2006. He was defeated by Republican Sen. Bob Corker.

Ford joined Morgan Stanley in 2011 as a managing director, a position that pays approximately $210,000.