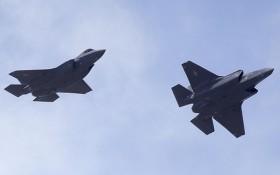 Nowhere to run, nowhere to hide. That’s the situation for Islamic State fighters still left holed up in the Iraqi city of Ramadi, where the U.S. military says airstrikes over the past week have killed fifty percent of their forces.

According to official reports, about 350 Islamic State fighters in the Iraqi city of Ramadi have been found and killed by U.S. airstrikes — approximately half the number of jihadists defending the city.

ISIS took Ramadi seven months ago, and is currently being pushed back from the city by U.S. airstrikes and Iraqi ground troops.

Col. Steve Warren, a spokesman for the U.S. military in Baghdad, tells reporters at the Pentagon that despite these losses, ISIS defenders are still clinging to much of central Ramadi.

Separately, Defense Secretary Ash Carter says Iraqi progress in retaking Ramadi has been “disappointingly slow.” He’s declining to predict how long the fight will last, but says he has no doubt Ramadi will fall.