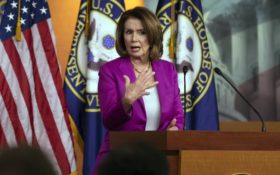 House Speaker Nancy Pelosi, D-Calif. knows the impeachment saga is almost over — and insiders are turning against her.

The outlook is bleak for Democrats. Liberals are going to lose, and it will cost Pelosi in the polls.

Republicans are unified, carrying out their promise to voters to protect President Donald Trump from the Democrat-led impeachment.

And Pelosi has a dark little secret…

During the impeachment fiasco, Pelosi was so desperate for ideas she was using CNN as her playbook.

That’s according to a Time Magazine feature story: The feature, a behind-the scenes-retelling of the path to impeachment, ended up exposing a dirty little secret from inside the Pelosi camp.

After the Democrat-led House impeached Trump along party lines — while the Senate was awaiting the official impeachment articles — Pelosi was using CNN to plan her next move.

An aide told the magazine —

On Dec. 17, the night before the full House would debate and vote on Trump’s impeachment, Pelosi met behind closed doors with top caucus members on the Democratic Steering and Policy Committee. She hinted, for the first time, that she was contemplating a curveball: declining to immediately transmit the impeachment articles to the Senate after the House passed them.

Pelosi, according to an aide, had been mulling the tactic since she heard former Nixon White House counsel John Dean float the idea on CNN on Dec. 5.

In other words, Pelosi’s office had no impeachment plan — and turned to the cable news network’s “experts” to offer guidance.

For reference, here is the CNN interview in question:

John Dean: Pelosi can hold articles of impeachment in House