“Yes, Hillary WILL be prosecuted” - The Horn News 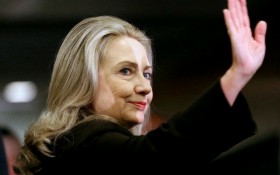 For months Hillary Clinton had tried to shrug off allegations that she may have committed crimes by hosting potentially classified emails on a private server while secretary of state. She even laughed at the notion that she could be prosecuted.

But now former Virginia Attorney General Ken Cuccinelli has come forward with a shocking legal opinion that could be a game-changer for the Clinton campaign. He believes “that the FBI will recommend prosecution.”

“Simply put, Mrs. Clinton is already in just as bad — or worse — of a legal situation than [General David] Petraeus faced,” Cuccinelli wrote in a recent op-ed for the New York Post.

Petraeus, former CIA director, pleaded guilty to federal charges for passing classified information to a woman he was having an affair with.

Many political insiders have long believed that Clinton is essentially untouchable. But as Cuccinelli explains, “FBI Director James Comey has a long history of ignoring political pressure” and will almost assuredly recommend charging Clinton for her illegal handling of classified emails.

After that, it would be up to the Justice Department to either ignore the FBI’s recommendations, which could cause embarrassment for the department, or prosecute Clinton. It remains unclear whether President Obama or his administration would try to prevent a prosecution from going forward.

This week, Clinton’s email controversy continued to deepen. In July, State Department officials installed a safe at the office of attorney David Kendall after the government determined some of Clinton’s emails may have contained classified information.

Now they’re admitting the safe wasn’t suitable for so-called top secret, sensitive compartmented information, known as TS/SCI, which the government has said was found in some messages.

This latest development r underscores how even the nation’s diplomatic apparatus didn’t anticipate Clinton would have sent or received such highly sensitive information on her private email server while secretary of state. Questions about her use of such a server have at times dominated her White House run.

Since then, the State Department has indicated through Freedom of Information Act releases of Clinton’s emails that dozens of messages that passed through her private server were later deemed classified, and two emails have since been slapped with a “TK” marking, for the “talent keyhole” compartment, suggesting material obtained by spy satellites, according to the inspector general for the intelligence community. They also were marked “NOFORN,” meaning information that can only be shared with Americans with security clearances.