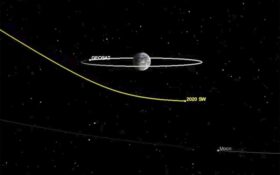 A surprise is coming to shake up the election a day before the polls open November 3rd.

Famed astrophysicist Neil deGrasse Tyson has warned voters that an asteroid is hurtling straight toward earth. According to the celeb scientist, the asteroid measures the size of a refrigerator.

“It may buzz-cut Earth on Nov. 2, the day before the Presidential Election,” he told his followers on Instagram.

But according to Tyson, it’s not expected to cause any damage.

“It currently has a 0.41% chance of entering our planet’s atmosphere, but if it did, it would disintegrate due to its extremely small size,” NASA Asteroid Watch said in an August tweet.

Bill Bottke, director of the department of space studies at the Southwest Research Institute, said asteroids this small, about 2 meters wide, hit the Earth several times per year.

“So there is nothing particularly alarming about this one, it just happens to be one we were lucky enough to detect before it makes a close encounter,” he said.

The asteroid was first detected in 2018 and was determined to be a near Earth asteroid after it was observed for 13 days, according to NASA. The space agency said on its Facebook page that the asteroid is expected to zoom past Earth on Nov. 3.

“One thing the news media is misunderstanding is the extremely small size of the asteroid,” Paul Chodas, director of the Center for Near Earth Object Studies at NASA’s Jet Propulsion Laboratory, said in a statement. “There is little doubt that it would disintegrate in the atmosphere in the small chance that it might be headed for impact.”