Yellowstone to hunters: Get ready for a big hunt - The Horn News 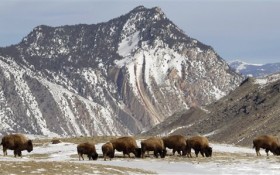 Park officials are scheduled to meet Thursday with representatives of American Indian tribes, the state and other federal agencies to decide on the plan.

It marks the continuation of a controversial agreement reached in 2000 between Montana and the federal government that was meant to prevent the spread of the disease brucellosis from bison to livestock.

Almost 5,000 bison roamed the park this summer. A harsh winter could drive thousands into areas of southwestern Montana.

Hunters, including from tribes with treaty rights in the Yellowstone area, are anticipated to kill more than 300 of the animals this winter. Others would be captured and slaughtered or used for research.

“Through the legal agreement the National Park Service has to do this,” said Yellowstone spokeswoman Sandy Snell-Dobert. “If there was more tolerance north of the park in Montana for wildlife, particularly bison as well as other wildlife, to travel outside the park boundaries, it wouldn’t be an issue.”

Yellowstone has one of the largest wild bison herds remaining in the world. Since the 1980s, more than 6,300 have been slaughtered and almost 1,900 killed by hunters.

Despite that aggressive effort, the park’s herds remain at near-record levels. Last winter, officials removed 737 of the animals, falling short of their target of up to 900 animals.

“They are a hardy species,” said Stephanie Adams with the National Parks Conservation Association. “But until there’s more room for bison to range beyond the park boundary, we’re going to have to rely on larger numbers of bison being sent to slaughter.”

The burly species, also known as buffalo, once roamed most of North America and numbered some 30 to 60 million animals, according to the U.S. Fish and Wildlife Service.

As the West was settled, commercial hunting drove bison nearly extinct. By 1884, an estimated 325 remained in the United States, according to the service.

Attempts to relocate portions of Yellowstone’s herds to avoid mass slaughters have seen minimal success, amid opposition from ranchers and landowners worried about disease and competition from bison for grazing space.

Montana Gov. Steve Bullock last year proposed allowing bison to roam year-round in an area west of Yellowstone if the population drops to fewer than 3,500 bison. The Democrat has yet to make a final decision, spokesman Mike Wessler said Wednesday.