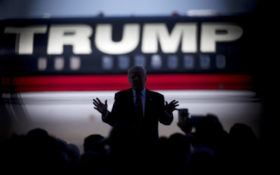 There’s a congressional plot against President Donald Trump — and it could lead to him being ousted from office.

Yale’s Dr. Bandy Lee, a renowned psychiatrist, confessed to STAT Magazine on Wednesday that she’d been approached by liberal lawmakers to join a group of psychiatrists, psychologists, and other mental health professionals that’s being secretly assembled in September to “review the president’s mental health, and review it on a periodic basis.”

Lee declined to name the three lawmakers that had contacted her, claiming they wished to be anonymous. However, the information she revealed is very credible.

Lee’s statement comes at the heels of a move by 27 House representatives, all Democrats, to co-sponsored Congressional Bill H.R. 1987 that would establish “a Commission on Presidential Capacity.”

If established, this mental health commission would give Congress the authority to create a legal body of 11 members that could declare a president “unable to discharge the powers and duties of his office” — the 4th provision of the 25th Amendment that could allow the president to be legally removed from the White House.

In other words, Lee — herself an outspoken opponent of Trump — and other liberal psychiatrists are being recruited in secret by Democrat lawmakers against the president.

An outspoken leftist panel of physicians could be biased enough to deem that Trump is mentally unwell… allowing liberals in Congress to get rid of him.

The implications are chilling for the future of America.

Imagine it: Any elected official that isn’t sufficiently liberal could be deemed insane by the government and thrown out of office.

In other words, liberal Democrats seem to be trying to establish a “Thought Police” to investigate crimethink.

The idea behind this “Thought Police” panel is something widely condemned by mental health professionals as unethical and improper.

It would be a violation of the “Goldwater Rule,” which was established in 1964 after 1,189 of psychiatrists responded to a Fact magazine survey claiming that Republican presidential candidate Barry Goldwater was unfit to serve.

Further, all patients have to give express permission to their physician to reveal information about health examinations, whether physical or mental.

However, that rule hasn’t stopped liberal psychiatrists like Lee from speaking out against Trump.

Last Friday, Lee and four other psychiatrists also wrote a letter to all the members of the U.S. House and Senate saying that Trump exhibits “severe emotional impediments that … present a grave threat to international security.

The letter echos a similar statement made in July, and asked Congress to “take immediate steps to establish a commission to determine his fitness for office.”

It seems liberal lawmakers received the letter — and have hatched the plot.