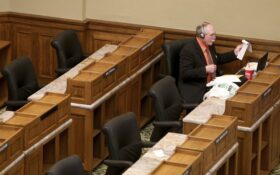 The son of a Wyoming state representative who opposed COVID-19 public restrictions said his father was positive for the coronavirus when he died.

Roy Edwards, 66, died Nov. 2 at Wyoming Medical Center in Casper after being hospitalized for more than a week with illness that was not immediately disclosed, The Gillette News Record reported.

Edwards continued to oppose public restrictions resulting from the pandemic during his recent campaign to retain his House seat. He was reelected the day after he died.

Mitch Edwards said his father initially experienced minor virus symptoms. He was told by a medical professional he had sinusitis, an inflammation of the sinuses, and did not need to be tested for COVID-19.

Roy Edwards was not advised to quarantine, but he did so as a a precaution, Mitch Edwards said.

His symptoms worsened and he had trouble breathing Oct. 23, when he again sought medical attention.

“My mom took him to the emergency room, where he was diagnosed with COVID pneumonia and transported to the Wyoming Medical Center in Casper,” Mitch Edwards said during his father’s memorial service Saturday.

His condition suddenly worsened after initially responding well to treatment, his son said.

“Roy believed that COVID was real and that it was serious. But at the same time he was critical and outspoken of policies that shuttered people’s livelihoods, resulted in husbands being kept from their wives and children being kept from their parents and loved ones being apart,” Mitch Edwards said.

For most people, the new coronavirus causes mild or moderate symptoms, such as fever and cough that clear up in two to three weeks. For some — especially older adults and people with existing health problems — it can cause more severe illness, including pneumonia, and death.