WOW! The 2019 prediction EVERY American needs to see - The Horn News 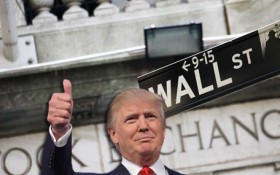 Two years ago, the Wall Street hotshots were all predicting financial ruin because of President Donald Trump.

And he hadn’t even taken office yet!

Today those same “geniuses” are making the same ugly predictions – and every time the stock market dips, they start running around like Chicken Little, screaming that the sky is falling.

One blaring recent headline on The Hill website cried out: “Expect a slowdown in economic growth in 2019.”

But not everyone is following the flock.

At least one expert not only ADMITS the Trump economy is stronger than anyone ever expected, she says that despite the dire warnings… despite the gloom-and-doom predictions… despite leftists such as Michael Moore openly ROOTING for an economic disaster… it’s only going to get BETTER from here.

“The economy is going to surprise on the high side next year,” Ark Invest CEO Catherine Wood told CNBC just before the holidays.

She was bold enough to make this prediction the day after the stock market dropped over concerns the Federal Reserve was being too tight with its money… something even Trump has slammed.

“So far, I’m not even a little bit happy with my selection of Jay,” he told The Washington Post last month, referring to Federal Reserve Chair Jerome Powell. He said the Fed is “way off-base with what they’re doing.”

He said Fed decisions are undermining his plans and policies. More importantly, they go against his longtime instincts as a businessman.

“They’re making a mistake because I have a gut and my gut tells me more sometimes than anybody else’s brain can ever tell me,” Trump told the newspaper.

But Wood indicated that Trump needn’t worry about the Fed’s rogue actions.

“I am seeing the seeds of a massive global tax cut brewing around the world in the form of actual income tax rates in China cut and tariff reductions,” she said.

Indeed, all the numbers point to a continued strong economy.

Everyone knows that unemployment rates, for example, keep dropping to new and in some cases historic lows. It recently hit its lowest rate in nearly half a century, a stunning 3.7 percent.

But another figure that doesn’t get nearly as much attention is also plunging.

The rate of people who were unemployed for even a short period of time fell to a 12-year low in 2017 and is expected to sink even lower for 2018, according to CBS MarketWatch.

Wages are also up – so not only are more people working, but they’re also making more from their jobs. And thanks to the historic tax cuts, they’re KEEPING more of the money they earned… which they can continue to pump back into the economy with new spending.

Just a week before the 2016 election, MIT economist Simon Johnson warned a Trump presidency would “likely cause the stock market to crash and plunge the world into recession,” according to The New York Times.

When Trump indeed won the election, the paper doubled down on gloom and doom. As the stock market fell after the election, Paul Krugman – who won a Nobel for his work as an economist – offered up a dire prediction.

“If the question is when markets will recover, a first-pass answer is never,” he said, predicting that “we are very probably looking at a global recession, with no end in sight.”

They keep predicting doom, but all signs point to a continued boom.

In other words, all the sour grapes from the leftist media prognosticators can’t spoil the New Year’s champagne!