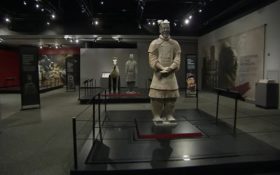 Federal authorities say a Delaware man snapped a selfie before stealing part of a $4.5 million statue at a Philadelphia museum.

According to an arrest affidavit filed Feb. 9, 24-year-old Michael Rohana was attending an Ugly Sweater Party at the Franklin Institute Dec. 21 when he entered the “Terracotta Warriors of the First Emperor” exhibit.

Authorities say Rohana took photos while posing next to a statue known as “The Cavalryman,” and then snapped off the statue’s left thumb.

Museum staff noticed the missing thumb Jan. 8, and the FBI traced it to Rohana five days later. It is unclear if he has legal representation.

A museum spokeswoman says the statue will be repaired. She says a security contractor did not follow standard procedures the night of the alleged theft.