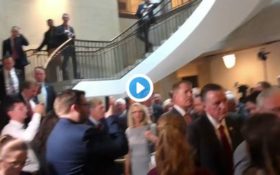 Led by Rep. Matt Gaetz, R-F.L., conservative lawmakers stormed a secret closed-door impeachment deposition Wednesday — and they wanted everyone to see it.

The meeting was a closed-door session with a Defense Department official who was scheduled to answer questions as part of the House impeachment inquiry into President Donald Trump.

Trump’s political allies decided to fight back against the “Soviet-style” impeachment process.

Shortly afterward, more than two dozen Republican House members held a news conference outside the secure room where the deposition was taking place. After, Gaetz and others stormed into the committee room, bringing the session to a halt.

The Republicans decried that the deposition was happening in secret and said Americans should be able to read the transcripts of any interviews being conducted as part of impeachment. Democrats, who control the committee, have promised to release the transcripts only after their investigation is complete.

Rep. Jim Jordan of Ohio said the Republicans are fed up with the secrecy surrounding the investigation.

“It’s finally reached a boiling point where members just said they are so frustrated at the idea that they can’t be a part of this and can’t see what’s going on,” said Jordan, who is the top Republican on the House oversight committee. “We’re at a standstill here.”

“The members have just had it and they want to be able to see and represent their constituents and find out what’s going on,” he said.

Republicans who do not serve on the committees conducting the impeachment inquiry were among those who marched into the secure facility.

Rep. Debbie Wasserman Schultz, D-Fla., said she had just walked into the room when the Republican lawmakers walked past Capitol Police officers and stunned Democratic staffers. The staff member who was checking identification at the entrance was “basically overcome” by the Republicans who wouldn’t take no for an answer, she said.

“Literally some of them were just screaming about the president and what we’re doing to him and that we have nothing and just all things that were supportive of the president,” Wasserman Schultz said.

WATCH: here's the video of when 2 dozen GOP members, led by @mattgaetz entered the secure hearing room (SCIF) to interrupt witness testimony in the #ImpeachmentInquiry as they demand access, despite not being committee members. They're complaining it's a "Soviet-style process". pic.twitter.com/8KddYz3r9D

Adam Schiff’s impeachment inquiry has been marked by secret interviews, selective leaks, weird theatrical performances of transcripts that never happened, and lies about contact with a whistleblower. pic.twitter.com/qmGtCqNUal