Wow! Conservative woman STUNS the world with one simple refusal - The Horn News 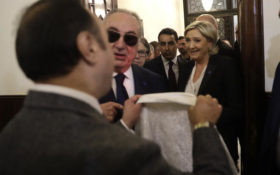 After informing Lebanon’s top Sunni Muslim cleric ahead of time that she would not don a headscarf at their meeting Tuesday, Le Pen was still bombarded with a request to wear one.

But she held her ground, strongly refused… and walked out of the scheduled appointment.

It caused liberal outrage, and critics claimed Le Pen was being disrespectful to Muslims for not covering her head in front of men. However, supporters around the world cheered, calling the move a powerful stand for women’s rights.

The showdown topped Le Pen’s three-day visit to Lebanon, where she held her first campaign meeting with a head of state.

The move highlighted the larger world-wide conservative movement of anti-globalism, much of which can be attributed to the election of Trump.

It drew the focus to Le Pen’s strong support for secularism and a proposal in her presidential platform that promotes banishing headscarves all together.

“I consider the headscarf a symbol of a woman’s submission,” Le Pen told reporters at the end of her visit. “I will not put on the veil.”

When she was confronted angry liberal accusations that her act was disrespectful, she pointed out the mainstream media hypocrisy by acknowledging that Former U.S. First Lady Michelle Obama did the same thing, and was cheered for her strength.

“I note that when Marine Le Pen refuses to don the headscarf, it is criticized, but when Michelle Obama refused to do it in Saudi Arabia, it was considered admirable,” she said, soliciting applause from the accompanying delegation.

French law already bans headscarves in all classrooms except universities. She has proposed extending the 2004 law banning headscarves and other “ostentatious” religious symbols in classrooms to all public spaces.

When asked if she fears her proposal may ignite the anger of the Muslim community, she said: “When in Rome, do as the Romans do.”

The headscarf incident occurred ahead of a scheduled meeting with Lebanon’s grand mufti, Sheikh Abdel-Latif Derian.

Shortly after Le Pen arrived at his office, one of his aides handed her a white headscarf to put on. Following a discussion with his aides that lasted a few minutes, she refused and returned to her car.

Le Pen said she had informed her host the night before that she would not wear the scarf but they didn’t cancel the meeting. Instead, she said, “They tried to impose it upon me.”

She said the Grand Sheik of Al-Azhar, the head of the Sunni world’s most prestigious learning institute, didn’t require her to don the headscarf. Photos of Le Pen with Ahmed al-Tayeb in 2015 in Cairo show her with her hair uncovered.

The officials at the mufti’s office “kept the meeting and consequently put me before a fait accompli,” she said. “I stuck to my position, because when I take a position it corresponds to a conviction. If [you don’t like it] never mind.”

On Monday, Le Pen met with President Michel Aoun, a Christian, and Prime Minister Saad Hariri, a Sunni Muslim. She said Syrian President Bashar Assad was “the most reassuring solution for France,” adding that the best way to protect minority Christians is to “eradicate” the Islamic State group.