Worse than Boehner? Next House Speaker disaster - The Horn News 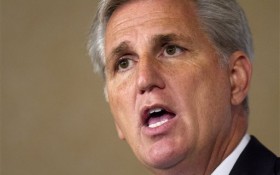 House Majority Leader Kevin McCarthy is moving aggressively to lock up support to succeed House Speaker John Boehner after making his candidacy official in a letter to fellow lawmakers.

Most political analysts consider McCarthy the clear favorite to take over – and it could be a disaster for social conservatives.

The California lawmaker has received terrible ratings from many conservative organizations that have analyzed his support of core Republican principles. Conservative Review has McCarthy rated as a solid F for voting record, scoring 45%.

Even worse, McCarthy is considered more liberal than Boehner.

Conservative group FreedomWorks has Boehner’s lifetime conservative track record at 89%. McCarthy is rated a much lower 64%, far behind dozens of other House members.

As House Republicans prepared for a special closed-door meeting Tuesday evening to discuss their path forward, a question consuming the Capitol is what the House Freedom Caucus will do. The band of 30 or so hardline conservatives who drove Boehner out by threatening a floor vote on his speakership does not have the strength to field a candidate of its own.

Some of the more establishment-minded Republicans are disgusted with the Freedom Caucus crowd over their role in pushing Boehner out. They argue such behavior could hurt the party’s presidential chances and are warning against any further such antics when McCarthy’s election for speaker is held, once Boehner leaves Congress at the end of next month.

“If you’ve just threatened one speaker with this and then you turn around before he’s even done anything and threaten the next speaker with this, it’s pretty clear to everyone else in the conference the speaker’s not the problem — you’re the problem,” said Rep. Tom Cole, R-Okla., a Boehner ally.

McCarthy has been endorsed by Boehner and is the heavy favorite.