This hard-working granny is… HOW old!? - The Horn News 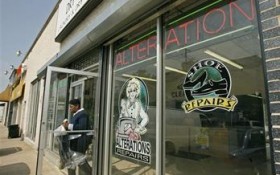 She’s making us look bad! Felimina Rotundo works 11 hours day, six days a week at a Buffalo, NY laundromat and says she has no plans to quit working even though she turned 100 two months ago.

She tells WGRZ-TV that she got her first job at 15 during the Great Depression and has been working ever since.

Rotundo works from 7 a.m. to 6 p.m. washing clothes and handling dry cleaning at the College Laundry Shoppe. She says she hasn’t considered retirement and will continue working as long as her health is good.

Rotundo, who hit the century mark in August, says she likes being out and working because it gives her something to do.