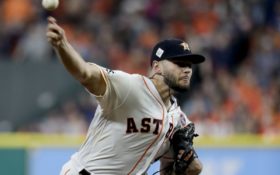 Kenley Jansen blew a 94 mph pitch past Carlos Beltran to wrap up a six-out save Tuesday night, and Dodger Stadium roared with equal elements excitement and anticipation.

This World Series is just too good to go anything less than seven games.

The Los Angeles Dodgers and Houston Astros will play for a championship in Chavez Ravine on Wednesday night, wrapping up two outstanding seasons in Game 7 — the biggest stage in North American team sports. Two 100-win teams will play a winner-take-all finale to the baseball season for the first time since 1931.

“This is a great series,” said Houston’s George Springer, who hit his fourth homer of the Series on Tuesday. “I know we lost (Game 6), but this is awesome.”

For the fourth time in seven years, the Fall Classic is going to Game 7. It’s the 39th time since baseball went to a best-of-seven World Series format, and the first time it has happened in back-to-back seasons since 2001-02.

“I think you dream about that as a kid,” said Dodgers outfielder Joc Pederson, whose third homer in four games powered Los Angeles past Houston in Game 6. “I think it’s going to be big for … all of us to just remember it’s still a baseball game. You’ve got to slow it down. Still play the same way that we’ve been playing all year that got us to here.”

Game 5 was a fascinating spectacle in Houston, a 13-12 win in 10 innings that put the Astros on the brink of their first championship. Game 6 merely was superbly played, with Los Angeles calmly snatching a crisp 3-1 victory from the edge of defeat.

The Dodgers and Astros have played one of the most memorable postseason series in recent history — and now they even get the chance to top the finale of last year’s World Series.

Just a year ago, the Chicago Cubs ended their 108-year championship drought with a 10-inning thriller in Game 7. Chicago got extra-inning RBIs from MVP Ben Zobrist and Miguel Montero in a landmark victory over the Cleveland Indians, whose own drought reached 68 years last fall.

Another significant drought will end at Dodger Stadium, which has never hosted a World Series Game 7 in its storied history.

The Astros haven’t won a title in 56 seasons of existence, while the Dodgers haven’t raised the trophy in 29 years.

“This series has been back and forth,” Houston manager A.J. Hinch said. “Two incredible teams trying to get to the finish line. And so now, obviously, it’s good for our sport. Necessarily bad for us, because we wanted to win (Game 6). … Both teams will be ready to play with about as much energy as you could possibly imagine in Game 7.”

The Astros, who began life as the Houston Colt .45s, had only reached one World Series and never won a game in the Fall Classic until this year. They have moved to the brink of reversing a curse of sorts leveled in 2014 by the noted jinx artists at Sports Illustrated, who put them on the cover as “Your 2017 World Series Champs” in a story about the franchise’s rebuilding project.

The Dodgers won one World Series in Brooklyn and five more on the West Coast between 1959 and 1988, but hadn’t returned to the World Series since. With the majors’ highest payroll and innovative manager Dave Roberts directing a mix of veteran stars and young talent, the Dodgers have returned to championship contention with five straight NL West titles — but the group has never been this close to winning it all.

Los Angeles will attempt to become the 23rd team to rally from a 3-2 deficit to win the World Series. The Dodgers have never accomplished the feat in six previous tries, but they haven’t been in this situation since 1978.

After leading the majors with 104 wins during the regular season, the Dodgers have home-field advantage in Game 7 — but only because of a change in baseball’s new labor contract. The winning league in the All-Star Game was given home-field advantage in the World Series from 2003-16 before the change. Without it, Game 7 would have been in Houston due to the AL’s 2-1 victory in 10 innings over the NL in July.

“The home-field advantage, having the last at-bat, it’s definitely huge,” Dodgers third baseman Justin Turner said. “Especially in this series, you see how many times it’s gone back and forth. So to be able to have that last at-bat is huge.”

The Game 7 matchup of starting pitchers appears to favor the Dodgers — but only to people who didn’t watch Game 3.

Yu Darvish, the Japanese star acquired by Los Angeles from Texas at the July 31 trade deadline, will be looking for redemption after turning in the shortest start of his big league career in Houston last week. With his famed slider doing almost nothing, he couldn’t get through the second inning of Game 3, giving up six hits and four runs while getting only five outs.

“If it was the regular season, I probably would have kept going,” Darvish said through a translator Tuesday. “I wouldn’t say it was the worst outing I ever had. I can’t pay that much attention to what happened last time. Just focus on (Wednesday’s) outing and have a good game.”

The Astros will counter with All-Star Lance McCullers Jr., whose victory in Game 3 was his first win in 12 appearances since June. But McCullers has been in solid form in his last two appearances, including his outstanding four-inning save in Game 7 of the AL Championship Series against the New York Yankees.

After Game 6, McCullers spent about 10 minutes long-tossing in the right-field corner at Dodger Stadium, keeping his arm loose for plenty of his signature curveballs in the big finale.

“I was hot and ready to go (in Game 6), if the situation came up where they needed me,” he said.

Both starters will have plenty of help at the first sign of trouble, however.

Dodgers ace Clayton Kershaw expects to pitch as a reliever in Game 7 after a short Game 5 start on Sunday. Alex Wood, the 16-game winner who pitched one-hit ball into the sixth inning of Game 4 last Saturday, will also be ready to go.

And closer Kenley Jansen, who picked up a smooth six-out save in Game 6, is eager to get on the mound one last time.

“I’m not trying to be a hero or anything, but there’s no tomorrow,” Jansen said. “You’ve got to go out there and fight.”

The entire Houston pitching staff will be available behind McCullers, including Dallas Keuchel and possibly even Game 6 starter Justin Verlander.

“I think all of our guys are going to have the adrenaline on their side,” Hinch said. “They’re all going to be ready to pitch. How we use them, how much we use them — we’ll get to the field, they’ll do their throwing program. If it’s one pitch or 100 pitches, I think we’re going to have to have all hands on deck.”