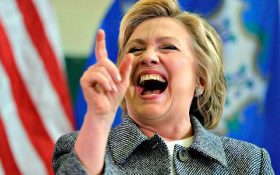 Hillary Clinton proved once again that she’s not fit to be president.

Presidents understand that they will be criticized by the media and that it’s all part of the system to keep our leaders in check.

But Hillary Clinton showed this week that she can’t handle the heat.

In her first press conference in 278 days, Clinton whined that the press is holding her to a higher standard than rival Donald Trump on their race to the White House.

“I find it frustrating, but it’s part of the landscape we live in,” Clinton complained to the press about their reporting.

Either Clinton’s been living under a rock for the last 10 months, or she only listens to what she’s told through her earpiece, because the biased media repeatedly and negatively covers Trump, while giving her a free pass on her email scandal and her multiple proven lies.

While the media asked her questions about poll numbers and the hardships of being a woman in the presidential race, Hillary somehow didn’t have to answer for all the scandals surrounding her campaign over the last 10 months.

During a 15 minute questioning period, not once was Clinton asked about her email scandal, in which she lied under oath, and was labeled “extremely careless” by FBI director James Comey.  Nor did she have to explain accepting foreign donations to the Clinton Foundation, or her questionable connections to Goldman Sachs and other big banks.

This wouldn’t be such a scandal had Clinton been regularly holding press conferences like her opponent. But when the potential president of the United States only takes press questions once every 10 months, she should have to answer for the most important and scandalous events during that time.

Meanwhile, during the time that Hillary Clinton boo-hooed about the unfair media, Fox News reported that Trump’s huge support from former general and admirals was alarmingly under-reported in the mainstream media.

The Washington Post and The Daily Beast sifted through the list of 88 of our nation’s heroes, to find a black mark on the record of any of the men and women who dedicated their lives to protecting this nation.

What they attempted to criticize is even more laughable.

The Washington Post had the audacity to attack a retired general for “disclosing classified information,” and The Daily Beast reprimanded a retired Air Force major for a crash that resulted in the death of Commerce Secretary Ronald Brown.

Did they consider this could be slightly hypocritical considering Clinton’s deleting of 30,000 emails, and her lies surrounding the death of four American heroes in Benghazi?

CBS reporter Will Rahn clearly explains why Clinton’s complaints of media bias are unwarranted when he says, “to the extent Clinton partisans are uncomfortable with the level of scrutiny she’s received this election, they only have their candidate to blame.” And he couldn’t be more correct.

If Clinton doesn’t want to be questioned by journalists, maybe she should start by second guessing her own shady actions – before she acts.

Following Clinton’s press conference, a senior communications adviser to the Trump campaign released a statement, labeling her press conference as desperate, and claiming they were the words of “a flailing campaign sinking in the polls, and characteristics of someone woefully unfit for the presidency of the United States.”

He sure got that right.