"Women's March" losing THOUSANDS of members because... - The Horn News 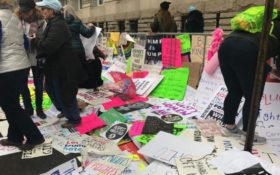 The women of the “Women’s March” are on the march again.

They’re marching OUT of the liberal group as they realize it’s being run by extreme radicals who embrace the notorious hatemonger Louis Farrakhan!

Three out of four of the group’s co-chairs have ugly links to this racist, anti-Semitic, homophobic, hate-spewing leader of the Nation of Islam.

One of them, Tamika Mallory, attended a February speech by Farrakhan.

Called on to denounce him, she refused.

“In that most difficult period of my life, it was the women of the Nation of Islam who supported me and I have always held them close to my heart for that reason,” she wrote in response to the outcry, but without mentioning him, The New York Times reported.

In the past, she shared an image of her being embraced by Farrakhan.

“Thank God this man is still alive and doing well,” she wrote. “He is definitely the GOAT.”

GOAT, of course, stands for “greatest of all time.”

Mallory, for the record, also openly mourned the death of Fidel Castro in 2016.

That’s not pro-women. That’s not even progressivism. That’s outright affection for a brutal and murderous dictator.

Another Women’s March “leader,” Carmen Perez, last year shared a photo of herself holding hands with Farrakhan, calling him “inspirational,” and in another post claimed he is “speaking truth to power.”

This is a man who has used the term “white devils,” called Judaism a “gutter religion” and launched attacks on groups the left usually just adores including gays and Hollywood.

Try being a conservative and criticizing either group. They’ll hound you to the ends of the Earth. They might even form a group to protest you, and maybe give it a name, like “Women’s March.”

But when Farrakhan does it, he’s the “greatest of all time.”

Here are some other examples of Farrakhan “inspiring” and “speaking truth to power”:

A petition on Change.org signed by nearly 2,000 people calls the group’s leaders out over its embrace of an open anti-Semite.

But that hasn’t stopped them.

In a letter to The New York Times, Women’s March co-president Bob Bland slammed anyone who dares to criticize them for as “apologists for the status quo, racist ideology and the white nationalist patriarchy.”