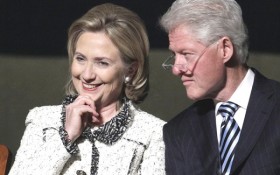 The women that were slaughtered by a Mexican drug cartel on Monday were reportedly connected to the Clintons — and it’s a bizarre tale of sex, drugs, and a cult that has critic’s heads spinning.

That’s according to The New York Post, which reported Tuesday that the religious community the victims lived in is heavily linked to convicted felon Keith Raniere and his NXIVM sex cult.

“The outpost Mormon community in Mexico is where underlings of NXIVM leader Keith Raniere recruited young women to work as nannies in an upstate New York compound run by the accused cult — suggesting at least in part that the jobs would get the girls away from their home region’s drug violence, according to a man hired by Raniere to produce a documentary about the group,” The Post wrote.

Top executives and Hollywood actresses in the reported cult were big-time donors to Hillary during her failed 2008 and 2016 presidential runs.

The Horn News reported on NVXIMs close ties to the Clintons in April of 2018:

If Hillary Clinton’s hardcore devotees seem a little cultish to you, maybe there’s a reason for it.

Some of them may be members of an alleged cult!

This is no April Fool’s joke. There’s an organization making headlines this week over bizarre and shocking allegations, leading to an FBI raid, arrests, salacious headlines and accusations of sex trafficking.

And somewhere in the middle is a strange link to the failed presidential candidate.

NXIVM calls itself a self-help group or, in its own seemingly innocuous slogan, it’s “a community guided by humanitarian principles that seek to empower people and answer important questions about what it means to be human.”

An FBI complaint says its classes cost big money – $5,000 for a five-day workshop – and that members are not only pushed to keep attending these classes, but to recruit others, with some getting commissions.

But what sets this group apart from your typical multilevel marketing scam or pyramid scheme is a series of OTHER allegations made by the feds.

The complaint says the organization has a second group deep inside it, a secret system of “masters” and “slaves,” complete with branding rituals.

“During the branding ceremonies, slaves were required to be fully naked, and the master would order one slave to film while the other held down the slave being branded,” a criminal complaint cited by The New York Daily News states.

The complaint also said the “slaves” not only had to carry out menial tasks for their “masters,” but that some were “directly or implicitly required” to have sex with the head of the cult.

And because he liked them thin, some were put on very low-calorie diets and had to “document every food they ate.”

This bizarre story is making headlines in upstate New York, where the alleged cult is based, in Canada where one ex-cultist is speaking out, in Mexico, where the head of the group was recently arrested and beyond.

But there’s one other location that figures prominently here but hasn’t been in many headlines yet.

A 2007 report in The New York Post said the head of this group was run out of the state in a different scheme when Bill Clinton was governor, but that didn’t sour his organization on the Clintons.

“Executives and top associates of the Albany-based NXIVM group – along with their family members – donated $29,900 to [Hillary] Clinton’s [2008] presidential campaign, according to federal records,” The Post reported at the time.

A Clinton spokesperson dismissed the allegations at the time as just a random coincidence.

“Over 100,000 people from across the country have contributed to Sen. Clinton’s campaign for change, and regardless of who supports her, she will always continue to stand up for what she feels is right,” spokesman Blake Zeff told the Post.

But it may be more than just a random connection: Other reports show that several key Clinton insiders had ties to the group. That same year, New York Magazine even reported that one of Hillary Clinton’s top fundraisers is – or at least was – a member.

There’s no evidence the Clintons have or had any knowledge of the workings of this creepy cult.

But it’s one more example of the former first family’s constant creepy connections, and how trouble seems to follow them around like… well… cultists following their master.

Raniere, the leader of NXIVM and Clinton donor, was convicted in June on charges of racketeering, forced labor, sex trafficking, and more.

Others in the cult, including Hollywood star actress Allison Mack and Bill Clinton’s nominee for Justice of Arkansas Supreme Court David Mays, have also been convicted.