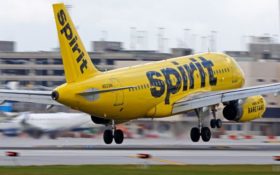 A woman was removed from an Spirit Airlines flight from Houston on Monday after having an irate meltdown mid-flight.

Eyewitness Chianti Washington took a video of the incident showing the woman pacing up and down the aisle, screaming hysterically at other passengers and the flight crew.

According to KPRC 2 News in Houston, the woman may have had a mental breakdown because she had not flown in a long time, and was panicking because the flight was diverted.

The flight from Houston to Minneapolis was diverted to Rochester, Minnesota after another passenger had a medical emergency. When the plane landed in Rochester, the erratic passenger began freaking out and was eventually removed from the flight.

The intense one-minute, and 41-seconds long video is full of expletives, and threats from the woman as other passengers can be seen trying to calm her.

Washington, who was interviewed hours after the flight landed, was in tears.

“Just to be in that confined space when someone that is going through something very traumatic in their life and there’s nothing you can do,” Washington told KPRC 2 News. “There’s nowhere you can go.”

During the video, the passenger could be heard screaming, “Do you know who my brothers are? They are f***ing Marine snipers. Do you want to f*** with a f***ing Marine?”

As passengers tried to calm her down, she began shouting, “Do you want to know what hell is? I’ve [expletive] been there 10 [expletive] times!”

Police officers eventually arrived and quickly removed the passenger from the flight — but she did not go quietly. She continued yelling and screaming.

Washington explained that she along with other passengers, and one flight attendant were crying after the incident.

“You never know,” she said. “They can have a breaking point at any moment and, you know, there are children on this flight and it just made me think of my 11-year-old son.”