Woman gets approval for 'covfefe' license plate - The Horn News 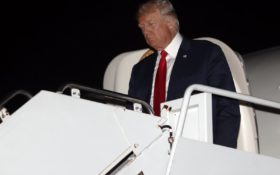 Ohio officials have granted a woman’s request to have President Donald Trump’s mysterious tweeted typo, “covfefe,” on her license plate.

Brittany Scott tells The Columbus Dispatch in May she saw a Twitter post by Trump that read: “Despite the constant negative press covfefe.”

The 29-year-old Cortland woman says she wrote in her application that her request stemmed from a tweet from the 45th president of the United States, and the Ohio Bureau of Motor Vehicles approved it.

Scott says she hasn’t received any complaints online or from fellow motorists.

A bureau committee examines hundreds of applications each day for vanity plates, denying profane, obscene or sexually explicit ones. It also rejects those it determines could provoke violence or advocate lawlessness.

Cortland is about 64 miles southeast of Cleveland.