WMDs found in Iraq - and ISIS has them! - The Horn News 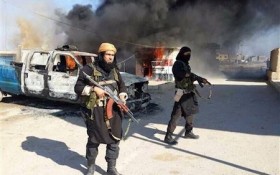 No WMDs in Iraq, huh? A second report is now surfacing that ISIS is using mustard gas to brutally attack Kurdish civilians and ground forces in North Iraq.

The Associated Press is reporting that the United States is investigating allegations that Islamic extremists of ISIS deployed chemical weapons against our Kurdish allies in northern Iraq.

Confirmation of chemical weapons use by ISIS would mark a dramatic turn in the U.S.-led effort to rout the extremist group from the roughly one-third of Iraq and Syria that it controls.

Although the U.S. and its coalition partners are mounting airstrikes against the Islamic State, they are relying on local forces like the Kurds, the Iraqi military and others to do the fighting on the ground. Already, those forces have struggled to match the might of the well-funded and heavily armed extremist group.

Similar reports of chemical weapons use by ISIS had surfaced in July.

Obama is not expected to interrupt his vacation to address the use of these chemical weapons on US allies.