Without Gitmo, authorities wonder: Where should we keep captured terrorists? - The Horn News 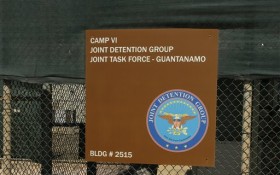 President Barack Obama has refused to send any suspected terrorists captured overseas to the American detention center at Guantanamo Bay. But if the U.S. starts seizing more militants in expanded military operations, where will they go, who will hold them and where will they be tried?

Those are questions that worry legal experts, lawmakers and others as U.S. special operations forces deploy in larger numbers to Iraq, Syria and, maybe soon, Libya, with the Islamic State group and affiliated organizations in their sights.

Throughout Obama’s presidency, suspects have been killed in drone strikes or raids, or captured and interrogated, sometimes aboard Navy ships. After that, they are either prosecuted in U.S. courts and military commissions or handed over to other nations.

This policy has been enough, experts say — at least for now.

“If you’re going to be doing counterterrorism operations that bring in detainees, you have to think through what you are going to do with them,” said Phillip Carter, former deputy assistant defense secretary for detainee policy. “If the U.S. is going to conduct large-scale combat operations or large-scale special ops and bring in more detainees, it needs a different solution.”

Rebecca Ingber, an associate law professor at Boston University who follows the issue, warns that if the U.S. engaged in a full ground war in Syria, “chances are there would need to be detention facilities of some kind in the vicinity.”

Obama has not sent a single suspected terrorist to the U.S. military prison at Guantanamo Bay, Cuba, where many have been detained for years without being charged or tried — something the president says is a “recruitment tool” for militant extremists.

He is to report to Congress this month on how he wants to close Guantanamo and possibly transfer some of the remaining detainees to the United States. That report also is supposed to address the question of future detainees.

Republican candidates who want to succeed Obama are telling voters that they would keep Guantanamo open.

“Law enforcement is about gathering evidence to take someone to trial, and convict them,” said Florida Sen. Marco Rubio. “Anti-terrorism is about finding out information to prevent a future attack so the same tactics do not apply. … But, here’s the bigger problem with all this: We’re not interrogating anybody right now.”

That’s not true, said Frazier Thompson, director of the High-Value Detainee Interrogation Group. The tight-lipped team of interrogators from the FBI, Defense Department, the CIA and other intelligence agencies gleans intelligence from top suspected terrorists in the U.S. and overseas.

Since it was established in 2009, that team has been deployed 34 times, Thompson said, adding that other government agencies conduct independent interrogations as well. “We are designed to deploy on the highest-value terrorist. We are not going out to interrogate everybody,” he said.

Thompson would not disclose details of the cases his team has worked or speculate on whether he expects more interrogation requests as the battle against IS heats up.

The U.S. has deployed about 200 new special operations forces to Iraq, and they are preparing to work with the Iraqis to begin going after IS fighters and commanders, “killing or capturing them wherever we find them, along with other key targets,” Defense Secretary Ash Carter said.

Brett McGurk, special presidential envoy for the global coalition to counter IS, told Congress this month that in the final six months of 2015, 90 senior to midlevel leaders were killed, including the IS leader’s key deputies: Haji Mutazz, the top leader in Iraq, and Abu Sayyaf, the IS oil minister and financier.

In May, a Delta Force raid in Syria killed IS financier Sayyaf, yielding intelligence about the group’s structure and finances. his wife, known as Umm Sayyaf, was captured

Her case illustrates how the Obama administration is prosecuting some terrorist suspects in federal courts or military commissions or leaving them in the custody of other nations.

Umm Sayyaf, a 25-year-old Iraqi, is being held in Iraq and facing prosecution by authorities there. She also was charged Feb. 9 in U.S. federal court with holding Kayla Mueller and contributing to her death in February 2015.

Ali Soufan, a former FBI agent who investigated and supervised international terrorism cases, including the U.S. Embassy bombings in East Africa and the attack on the USS Cole in Yemen the 1990s, said sending suspected terrorists through the American criminal justice system works. He said the courts are more effective than military commissions used at Guantanamo that have been slow in trying detainees who violate the laws of war.

“The current practice of investigating and prosecuting terror suspects has proved incredibly effective,” Soufan said, noting that since the Sept. 11 attacks in 2001, only seven people have been tried and convicted under military commissions. “During that same time period, hundreds of terrorists have been convicted in federal courts and almost all are still in jail.”

But it’s hard to evaluate the effectiveness of the system.

The Justice Department declined to provide the number of foreign terrorist suspects who have been prosecuted or the number handed over to other countries, or their status. Lawmakers, including Rep. Duncan Hunter, R-Calif., have asked the Defense Department for the numbers.

Reports on how other countries handle the suspects are classified.

“The government needs to be more transparent to the American people — and to the world — about who it is transferring overseas, and what procedures are in place to make sure we are not transferring individuals into situations where human rights will be abused,” he said.