With impeachment, Elizabeth Warren is in deep trouble - The Horn News 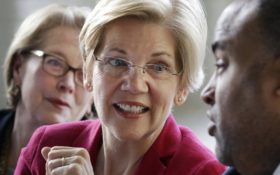 The impeachment trial of President Donald Trump could cost progressive leaders their best shot at the White House — all because of an unintended consequence.

And no one is more aware of the political ramifications of the ongoing impeachment trial than Sen. Elizabeth Warren, D-Mass.

Warren has spent her political capital telling Democratic voters that she’s the party’s best chance at beating Trump in the 2020 election.

That could cost Democrats the White House.

Inside the critical early primary state of Iowa, Warren’s decline has been more drastic.

She’s gone from frontrunner to polling at just 15 percent, Monmouth University reported last week. Inside the state’s closed caucuses, polling under 15 percent would result in Warren being a “non-viable candidate” in many polling districts — a disastrous result that could leave her with a distant fourth or fifth finish.

There is still hope for Warren’s campaign — but it’s fading fast.

With just 10 days left until the first primary, Warren’s campaign needs her to spend every waking minute on the campaign trail in Iowa campaigning for those undecided votes.

But as a senator, she’ll be stuck in Washington, D.C. at Trump’s impeachment trial.

Instead, she’s sent surrogates to stump throughout Iowa — something unfavorable to Democratic voters in the state, who expect to personally meet presidential candidates “multiple times” in the lead-up to their primary.

As the candidate with some of the most “favorable” polling matchups with the president, that means this impeachment trial may well cost Warren — and by proxy, the Democrats — the best shot at the White House in the upcoming general election.