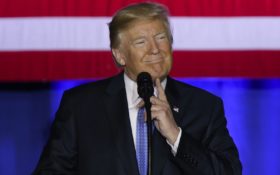 Members of Congress have officially drafted articles of impeachment… but not for President Donald Trump.

Trump has frequently dismissed the Mueller probe as a partisan “witch hunt” that has no basis in reality. Because Attorney General Jeff Sessions recused himself from overseeing the special counsel’s investigation, the responsibility has fallen to Rosenstein.

Since then, Rosenstein has been the subject to withering criticism for his willing participation in the so-called “witch hunt.”

Conservatives have fumed for months that he should be removed from his position for refusing to turn over critical documents to Congress. Additional, the behavior of federal investigators working on the Russian investigation have added fury to the call for Rosenstein’s job.

Despite this, Trump has frequently denied reports from the mainstream media that he’s planning to fire Rosenstein.

So, the House Freedom Caucus — one of the most powerful voting blocs in Congress and led by North Carolina Rep. Mark Meadows — finalized a draft on Monday that could being Rosenstein’s impeachment, should they need it.

“My frustrations about their inability to respond to simple requests could warrant further action,” Meadows said, calling the one-page document a “last resort option, if the Department of Justice” continues to withhold information from Congress.

Meadows added that that many of his colleagues are at the breaking point with Rosenstein, The Washington Post reported.

The impeachment write-up claims Rosenstein “engaged in a pattern of conduct incompatible with the trust and confidence placed in him in that position by refusing to comply with a subpoena issued by the House Committee on the Judiciary on March 22, 2018,” connected to Congress’ investigation into alleged abuse of the Foreign Intelligence Surveillance Act (FISA).

Rosenstein “failed to enforce multiple laws,” including “improper authorization of searches and electronic surveillance [under FISA]”, and “failed to act on behalf of the Attorney General by properly supervising the administration of FISA by failing to demonstrate probable cause to believe the targets of surveillance were a foreign power or agents of a foreign power,” the draft also claimed, according to Fox News.

— Stephen Dietrich is the Associate Publisher of The Horn News.