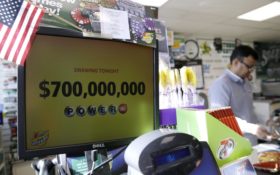 A single winning ticket has been sold for the massive Powerball $758.7 million jackpot in Wednesday night’s drawing. The winning ticket was sold in Chicopee, Massachusetts.

The lucky numbers from Wednesday night’s drawing are 6, 7, 16, 23 and 26, and the Powerball number is 4. The Massachusetts State Lottery announced Thursday morning that the winning ticket was sold at the Pride Station & Store location in Chicopee, Massachusetts, correcting an earlier announcement that it was sold at a different store in Watertown.

The odds of matching all six numbers remain the same, at a miserable one in 292.2 million, regardless of the jackpot prize. However, a larger prize attracts more players and that means more number combinations are selected, so the probability increases that one or more people will buy winning tickets. So, an individual’s chances of winning don’t increase, but the odds that someone will win do rise.

Tom Rietz, a professor at the University of Iowa who researches probabilities, says it’s hard for people to fathom what odds of one in 292.2 million mean. For a better sense, he suggests people envision the 324 million U.S. residents. Your chance of winning is roughly comparable to being that one lucky person out of the entire population, with everyone else losing. Cornelius Nelan, a mathematics professor at Quinnipiac University, puts the odds in perspective by noting they’re about the same as flipping a coin and getting heads 28 times in a row.

The Massachusetts State Lottery had actually announced around 2:30 a.m. Thursday that Handy Variety in Watertown, near Boston, had sold the winning ticket.

But shortly before 8 a.m., the state lottery said it had made a mistake, and that the winning ticket was sold across the state at the Pride Station & Store in Chicopee, in western Massachusetts.

Michael Sweeney, executive director of the Massachusetts State Lottery, told WBZ-AM that it was a case of nerves.

“We had a couple of excited people at 1 o’clock in the morning being a little nervous about handling this,” he said, adding that the buck stops with him.

Sweeney said the lottery had not yet heard from the winner.

He said the Chicopee store will receive $50,000 for selling the winning ticket. He also said that the store in Watertown did sell a ticket that won a $1 million prize.

The $758.7 million jackpot is second only to a $1.6 billion prize shared by three people in January 2016. The current jackpot refers to the annuity option, doled out in 30 payments over 29 years, increasing 5 percent annually. Nearly all winners favor the cash option, which would now be $480.5 million.

The advantage of taking cash is that people can invest the money with hopes of a greater return than the guaranteed payments they would receive through the annuity. The downside is they’ll pay a little more in taxes and won’t have the certainty of giant annual paychecks for decades.

Powerball Product Group Chair Charlie McIntyre said in a statement early Thursday that the $758.7 million jackpot is the largest grand prize won by a single lottery ticket in U.S. history.

Winners should expect to pay 40 percent or more in taxes. Federal income taxes will take a 25 percent bite from winnings. State taxes vary, so the amount winners will pay in depend on where they play. Some of the nation’s biggest states, including California and Texas, don’t assess state taxes on lottery prizes, so winners in those spots would be just a bit richer.