Wild ride! Car ends up on the roof of a CA house - The Horn News 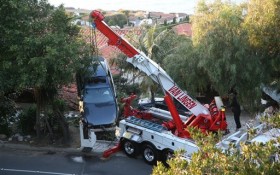 It’s hard to know what was more amazing: An out-of-control car ending up on the roof of a Southern California house or the driver somehow escaping serious injury despite the wild ride.

Velez tells the Daily Breeze newspaper that the man hit two parked cars, rolled up the driveway of a house, ricocheted off another car and was somehow went skyward, ending up atop the detached garage of a neighboring house.

Firefighters pulled the man from the car and took him to a hospital, but he wasn’t seriously hurt. No one else was injured.

Police got a crane to pull the car off the roof.