Biden: Big trouble for Democrats in 2020 - The Horn News 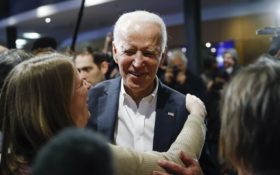 Former Vice President Joe Biden this week warned that his party could be in trouble – facing a very real possibility that the Democratic voter base won’t rally around its eventual candidate.

Asked if the party could unite around Sen. Bernie Sanders, I-V.T. should he win the nomination, Biden wasn’t exactly enthusiastic.

“I’m not going make judgments now,” he told reporters. “I just think that it depends upon how we treat one another between now and the time we have a nominee.”

Biden may very well be correct, but the statement seemed like another sign of the growing tension between the two campaigns, which came to a head when Sanders surrogate Zephyr Teachout – a law professor – wrote an op-ed claiming the former vice president had “a big corruption problem.”

Sanders later apologized, but the Biden campaign continued to fire back.

A reporter asked Biden why the apology wasn’t enough.

In a now-viral moment caught on camera, Biden unleashed a frenzy of “whys” at the journalist:

WATCH: After a campaign event in Mason City, Iowa, @joebiden reacts to @edokeefe's question about his ongoing feud with @berniesanders: "Calm down, it's okay." https://t.co/a2hmMbnjnf pic.twitter.com/ymOMWRR2zP

In another instance, when asked if the Vermont senator is a Democrat, Biden was quick, blunt and correct.

“Well, he says he’s not,” he told reporters. “He’s not registered as a Democrat.”

Sanders is an independent even as he seeks the Democratic nomination.

But Biden’s message was also somewhat coded: Biden might really be saying that Sanders is not one of us.

“Everything I’ve suggested to you, that I want to do, I’ve figured how to pay for it,” Biden said, bragging about his own proposals. Then he shifted to Sanders. “He’s acknowledged he doesn’t even know what ‘Medicare for All’ is going to cost, and how he’s going to do it.”

“How do you get something done that way?” he added.

Sanders and his surrogates have been just as surly; in one case its camp shared a doctored video that made it look as if Biden were praising proposed Social Security cuts.

He wasn’t, according to PolitiFact.

“[I]t is simply a lie, that video that is going around, and ask anybody in the press, it’s a flat lie,” Biden told reporters. “I think it’s beneath him, and I’m looking for his campaign to come forward and disown it, but they haven’t done it yet.”

With no other candidate even approaching the 50 percent mark in polls, the contest could come down shady backroom dealing and the Democrats’ infamous “super delegates.”

In this year’s Democratic National Convention, 1 in 6 delegates will be super delegates – or delegates who aren’t pledged to a specific candidate but instead can vote for who they want… regardless of the will of the primary voters of each state.

They won’t get to vote on the first ballot (a change from 2016). But if no one gets a majority in that first round, which is a distinct possibility given the current polling, these un-elected delegates will get to step in and vote in the next rounds.

In addition, all of the pledged delegates will be released from their candidates and allowed to change their vote after a failed first round.

Sanders’ famously loyal delegates likely won’t change. But others may – setting up a scenario in which Sanders could win a plurality of the primary delegates… but lose at a contested convention.

The 2016 Democratic convention was notoriously unruly as Sanders supporters jeered, booed, made a scene and blamed establishment Democrats for losing out to Hillary Clinton.