Whoops! 3 big lies from the Dem debate (and the truth) - The Horn News 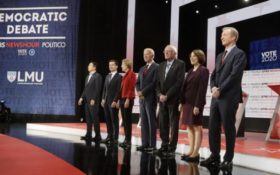 Seven Democratic presidential contenders tangled Thursday night in the last debate of the year, hard on the heels of President Donald Trump’s impeachment.

Here’s how some of their claims compare with the facts:

THE FACTS: Sanders is wrong. Sort-of.

Sanders’ name is practically synonymous with “Medicare for All,” a huge taxpayer-financed, government-run system that would do away with private insurance.

Biden, a former vice president, has proposed building on “Obamacare,” adding an expensive Medicare-like “public option” that any U.S. citizen or legal resident could opt for.

The U.S. has a hybrid health care system, that balanced between private coverage through employers, as well as government coverage through programs like Medicare and Medicaid. Biden would retain a mix of private and public coverage, so in a sense that’s the “status quo.”

But Biden’s public option that anyone could join would be a momentous change to the system. It’s a big enough change that the insurance industry is opposed, as are many other health industry players.

So Bidencare would not be the status quo. It would be more like an expansion of “Obamacare.”

SANDERS: “Today in America, we have the highest rate of childhood poverty of almost any major country on Earth.”

THE FACTS: Simply not true. Not even close.

There are nearly 200 countries in the world, many with people living in extreme poverty that most Americans would struggle to fathom. Poverty is also a relative measure in which someone who is poor in one nation might look rather prosperous in another.

But the Organization for Economic Co-operation and Development updated its child poverty report in 2018.

The United States has work to do, but it was not among the 42 nations listed in the report that had the highest levels.

SANDERS: “Instead of spending $1.8 trillion a year globally on weapons of destruction, maybe an American president — i.e. Bernie Sanders — can lead the world. Instead of spending money to kill each other, maybe we pool our resources and fight our common enemy: climate change.”

THE FACTS: The United States does not spend $1.8 trillion a year annually on defense.

That figure represents the total spent by the entire world on defense annually, and even that isn’t accurate.

When the Stockholm International Peace Research Institute released the $1.8 trillion figure in April, it said that it “discourages the use of terms such as ‘arms spending’ when referring to military expenditure, as spending on armaments is usually only a minority of the total.”