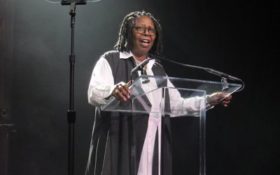 Liberal celebrity Whoopi Goldberg is using Christianity to cash in — and fueling outrage by delibertely using the divisive term, “Happy Holidays” to sell sweaters to liberals.

The View host is back again (unfortunately) with a line of ugly sweaters, except she is refusing to call them Christmas sweaters or put any association with the birth of Christ on them.

Why This Industry Deserves to Die [sponsored]

Goldberg jumped at the opportunity to intentionally disrespect the authority of the president — while also cashing on on the religious beliefs of Christians.

“We’re getting near that beautiful Christmas season that people don’t talk about anymore. They don’t use the word Christmas because it’s not politically correct,” said Trump,

“You go to department stores and they’ll say ‘Happy New Year,’ or they’ll say other things and it’ll be red, they’ll have it painted. But they don’t say — well guess what? We’re saying Merry Christmas, again.”

Christians around the States have felt the words that Trump spoke and are more than delighted to hear the president weigh in on the war against Christmas. Christ is, afterall, the reason for the season.

Christmas is a sacred time for most Americans — but for Goldberg, it’s a time to cash out. She believes,“This idea that we can only say one thing is ridiculous. It’s ridiculous. And clearly, this is some political ploy to make people feel better in some way.”

Her sweater designs show no indication of being ‘an open to all types of religion person’, as she preaches to be. Instead, the designs include a “Happy Holidays” sweater, two Mrs. Clauses kissing, a black Santa and a white Santa dancing, and a baby Santa in a diaper.

Though the comedian proclaims herself to be an inclusive individual, she includes a Hannukah themed sweater… but excludes a sweater to celebrate Christmas in her lineup.

Whoopi Goldberg’s ‘holiday’ sweaters have insulted Christians and shown that she holds no respect for religious beliefs — it’s only cash she respects.

“I hope that if people buy them they’re buying them with the knowledge that they’re meant to bring some laughs and some cheer,” said Goldberg.

Well, Whoopi you have completely lost any chance of Christians spending a dime on your ugly sweaters.

— Kylie Handler is a News Editor of The Horn News