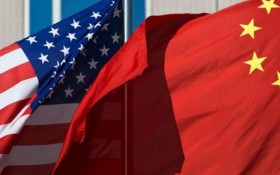 U.S. officials listed $300 billion more of Chinese goods for possible tariff hikes while Beijing vowed Tuesday to “fight to the finish” in an escalating trade battle that is fueling fears about damage to global economic growth.

The U.S. Trade Representative’s Office issued its target list after Beijing announced tariff hikes Monday on $60 billion of American goods in their spiraling dispute over Chinese technology ambitions and other irritants. Chinese authorities were reacting to President Donald Trump’s decision last week to impose punitive duties on $200 billion of imports from China.

The president had a message for patriotic farmers and those American workers who might be caught in the middle — hold the line.

Our great Patriot Farmers will be one of the biggest beneficiaries of what is happening now. Hopefully China will do us the honor of continuing to buy our great farm product, the best, but if not your Country will be making up the difference based on a very high China buy……

….This money will come from the massive Tariffs being paid to the United States for allowing China, and others, to do business with us. The Farmers have been “forgotten” for many years. Their time is now!

“China will fight to the finish,” said a foreign ministry spokesman, Geng Shuang.

The latest U.S. list of 3,805 product categories is a step toward carrying out Trump’s May 5 threat to extend punitive 25% duties to all Chinese imports, the USTR said. It said a June 17 hearing would be held before Washington decides how to proceed.

The list “covers essentially all products” not already affected by punitive tariffs, the USTR said.

“The risk of further escalation is far from over,” said Timme Spakman of ING in a report.

The United States is “sucking the blood of the Chinese,” said a comment left on the “Strong Country” blog of the ruling Communist Party’s newspaper People’s Daily. Another comment on the site said, “Why are Chinese people bullied? Because our hearts are too soft!”

When the time is right we will make a deal with China. My respect and friendship with President Xi is unlimited but, as I have told him many times before, this must be a great deal for the United States or it just doesn’t make any sense. We have to be allowed to make up some…..

….of the tremendous ground we have lost to China on Trade since the ridiculous one sided formation of the WTO. It will all happen, and much faster than people think!

Trump started raising tariffs last July over complaints that China steals or pressures foreign companies to hand over technology and unfairly subsidizes businesses Beijing is trying to build into global leaders in robotics and other fields.

A stumbling block has been U.S. insistence on an enforcement mechanism with penalties to make sure Beijing carries out their end of the deal.

China has made similar promises in the past and then failed to live up to their end of the bargain.

Odds of a settlement “remain high,” said Mark Zandi of Moody’s Analytics in a report. “But suddenly a number of other scenarios seem possible, even one in which the U.S., China and the global economy suffer a recession.”

On Monday, the Dow Jones Industrial Average fell 2.4% and the tech-heavy Nasdaq lost 3.4% for its biggest drop of the year.

Also Monday, Trump said he still was considering whether to go ahead with penalties on the additional $300 billion of Chinese goods. He told reporters, “I have not made that decision yet.”

China is running out of U.S. imports to penalize because of the lopsided trade balance. Chinese regulators have instead targeted American companies in China by slowing down the clearing of shipments through customs and the processing of business licenses.