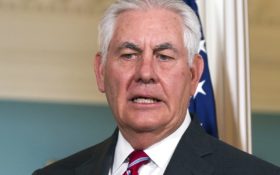 The move would put Pompeo, a former congressman who has grown close to Trump during his tenure atop the CIA, in charge of U.S. diplomacy. Tillerson, the former Exxon Mobil CEO, has had a rough first year characterized by tensions with Trump in several foreign policy areas and negative publicity over Tillerson’s envisioned overhaul of the State Department.

U.S. officials and other individuals familiar with White House thinking said the plan that’s been floated envisions Sen. Tom Cotton as the most likely candidate to take over Pompeo’s job at CIA. Cotton’s office wouldn’t comment on that possibility, other than to say: “Senator Cotton’s focus is on serving Arkansans in the Senate.”

It wasn’t clear how quickly such a plan might be put in place, nor whether Pompeo had been formally approached about it. A White House official said that the timing remains unclear. The New York Times, which first reported the potential shake-up, said it would likely happen within several weeks.

Several administration officials said that Pompeo has said in the past that he’s open to taking the job.

Tillerson aides and the State Department did not immediately respond to requests for comment.

The White House started telling people in September that Tillerson would be replaced, said a senior administration official. By that point, some issues that needed sign-off from the secretary of state were being put off until after Tillerson was gone, said the official, who like others wasn’t authorized to comment publicly and demanded anonymity.