White House responds to DACA ruling (they're not happy!) - The Horn News 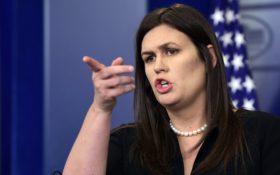 The White House on Wednesday sharply criticized a federal judge’s ruling that the Trump administration must resume a program that has shielded hundreds of thousands of young immigrants from deportation.

While the government has 90 days to restate its arguments before the order takes effect, presidential press secretary Sarah Huckabee characterized the ruling as “good news” for smuggling organizations and criminal networks and “horrible news for our national security.”

If Tuesday’s ruling by U.S. District Judge John D. Bates in Washington survives the three-month reprieve, it would be a new setback for the Trump team because it would require the administration to accept requests from first-time applicants for the Obama-era program.

Two nationwide injunctions earlier this year applied only to renewal requests for the Deferred Action for Childhood Arrivals program. DACA recipients are commonly referred to as “Dreamers,” based on never-passed proposals in Congress called the DREAM Act that would have provided similar protections for young immigrants.

Siding with Princeton University and the NAACP, Bates said the administration’s decision in September to phase out the program over six months relied on “meager legal reasoning.” He invited the Department of Homeland Security to try again, “this time providing a fuller explanation for the determination that the program lacks statutory and constitutional authority.”

The judge wrote that the administration’s explanation was “particularly egregious” because it didn’t mention that many of the hundreds of thousands covered by the program had obtained jobs and pursued education based on the assumption that they would be allowed to renew.

DHS didn’t immediately respond to a request for comment.

The administration contends the program started in 2012 is a misuse of executive power and that it had to act because Texas and other states threatened to sue.

In January, U.S. District Judge William Alsup in San Francisco ruled that the administration failed to justify ending the program; his nationwide injunction forced the administration to resume accepting renewal requests within a week. A federal judge in New York issued a similar ruling in February; a judge in Maryland sided with the administration.

The Supreme Court in February denied the administration’s unusual request to leapfrog appeals courts and take on Alsup’s injunction, ensuring that DACA would stay in effect for the time being.

The 9th U.S. Circuit Court of Appeals put its review of Alsup’s decision on a fast track, but legal experts don’t expect a decision until June at the earliest. From there, it is expected to go to the Supreme Court, which may not rule until the spring of 2019.

The administration could appeal immediately Bates’ ruling or try again with Bates in the 90-day window he gave. Consolidating the DACA challenges into a single case is a possibility, said Stephen Yale-Loehr, a professor of immigration law practice at Cornell University.

“It’s complicated now because you have these different cases,” Yale-Loehr said.

Nearly 690,000 people were enrolled when the Trump administration said it was ending the program, and 8 out of 10 were from Mexico. To qualify, they needed to have arrived before they turned 16, been younger than 31 in June 2012, completed high school or served in the military, and had clean criminal records. The two-year-permits are subject to renewal.

Yale-Loehr estimates that tens of thousands of people who meet the criteria but never applied could benefit from Bates’ ruling.

The NAACP, joined by two major labor unions, sued the administration in September. Princeton, joined by Microsoft Corp. and a student, followed in November. Bates, an appointee of President George W. Bush, combined the two cases.

“While the decision does not fully resolve the uncertainty facing DACA beneficiaries, it unequivocally rejects the rationale the government has offered for ending the program and makes clear that the (Department of Homeland Security) acted arbitrarily and capriciously,” he said.