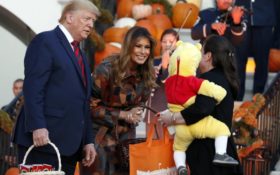 President Donald Trump and first lady Melania Trump have handed out candy to hundreds of military families and local schoolchildren as the White House got a head start on Halloween.

The children dressed up as astronauts, military officers, pirates and dinosaurs as they greeted the president and first lady one-by-one Monday. The Air Force Strolling Strings played “Thriller” from Michael Jackson, “The Addams Family” theme song and other spooky tunes to set the mood.

A Halloween display of Black Forest trees wrapped around the columns of the South Portico, while pumpkins lined the staircases.

Several agencies were also on hand to help in the fun, with the Secret Service showing off the presidential limo known as “The Beast” and NASA displaying the suit that astronauts wear for spacewalks.