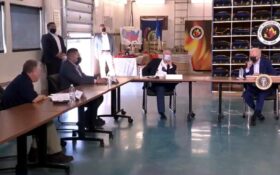 “Can I ask you a question?” Biden said.

Biden followed up. “One of the things that I’ve been working on with some others is…”

Biden was cut off mid-sentence, as the White House abruptly ended the livestream after Biden went off-script.

BIDEN: “Can I ask you a question?”

Fox News asked Biden’s office to comment, but the White House failed to respond in time.

The White House has pulled similar antics before.

Last month, staff cut off Biden’s audio feed during a question about Afghanistan.

On Aug. 25, NBC’s Peter Alexander asked, “If Americans are still in Afghanistan after the deadline what will you do?”

Biden moved his lips, but the video went silent.

In Alexander’s account, Biden said, “You’ll be the first person I call.”

Earlier, in March, the White House cut Biden’s feed immediately after he said, “I’m happy to take questions if that’s what I’m supposed to do, Nance — whatever you want me to do.”

REPORTER: “If Americans are still in Afghanistan after the deadline what will you do?”

I asked President Biden what he will do if Americans are still in Afghanistan after the 8/31 deadline.
His response: “You’ll be the first person I call.”
Took no questions. pic.twitter.com/MlyFIayrMZ

BIDEN: "I'm happy to take questions if that's what I'm supposed to do…"

“When Biden gives public remarks, some White House staffers will either mute him or turn off his remarks, according to White House officials,” Politico‘s Alex Thompson reported last week. “They’re filled with anxiety that he’s going to take questions from the press and veer off the West Wing’s carefully orchestrated messaging.”

“A lot of times, we say, ‘Don’t take questions,'” White House Press Secretary Jen Psaki said on a podcast with David Axelrod, a Democratic Party strategist. “But he’s going to do what he wants to do because he’s the president of the United States.”

Biden has earned a reputation as a formidable rambler. In January 2006, he faced criticism for taking up 24 of the 30 minutes allotted for questioning Samuel Alito, who was then a nominee for Supreme Court justice.

“Joseph Biden of Delaware resembled a parody of a bloviating politician,” CNN’s Jeffrey Toobin wrote in 2007.

In this particular instance from Monday, Biden’s office may have been trying to hide something, or it may have been succumbing to normal, bureaucratic incompetence. The reason for the faulty video remains unclear.

One might invoke Hanlon’s Law: “Never attribute to malice that which can be adequately explained by stupidity.”