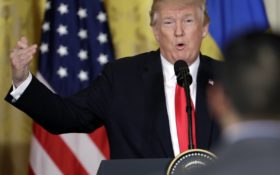 President Donald Trump gave a thumbs-down Sunday to the comedian over her “nasty” attack on his chief spokeswoman at the annual dinner, offending present and past members of his administration, including one who walked out in protest.

Wolf is known as a contributor on Comedy Central’s liberal show, “The Daily Show With Trevor Noah.” But some of her jokes, particularly a series of barbs about Sanders as Sanders sat just feet away, seemed to spark the most outrage.

“I actually really like Sarah. I think she’s very resourceful, she burns facts and then she uses that ash to create a perfect smoky eye. Maybe she’s born with it, maybe it’s lies. It’s probably lies,” the comedian said.

The nasty comments had even Wolf’s hosts scrambling to apologize. WHCA President Margaret Talev said she has “heard from members expressing dismay with the entertainer’s monologue and concerns about how it reflects on our mission.” She said she will work with the incoming president of the group and take comments from members on their views “on the format of the dinner going forward.”

Trump joined in on the criticism.

While Washington, Michigan, was a big success, Washington, D.C., just didn’t work. Everyone is talking about the fact that the White House Correspondents Dinner was a very big, boring bust…the so-called comedian really “bombed.” @greggutfeld should host next year! @PeteHegseth

The president, who regularly lobs sharp attacks at the mainsteam media, including individual news organizations and reporters, declined to attend the journalism awards dinner for the second consecutive year. He instead held a campaign rally in Michigan.

He explained Monday morning that, “The White House Correspondents’ Dinner is DEAD as we know it. This was a total disaster and an embarrassment to our great Country and all that it stands for. FAKE NEWS is alive and well and beautifully represented on Saturday night!”

The White House Correspondents’ Dinner is DEAD as we know it. This was a total disaster and an embarrassment to our great Country and all that it stands for. FAKE NEWS is alive and well and beautifully represented on Saturday night!

Sean Spicer, who preceded Sanders at the White House lectern, tweeted after dinner that the night “was a disgrace.”

Tonight’s #WHCD was a disgrace

Others, including Ed Henry, chief national correspondent for Fox News and a former association president, and even MSNBC’s “Morning Joe” co-host Mika Brzezinski, called on the association to apologize to Sanders.

Matt Schlapp, chairman of the American Conservative Union, tweeted that he and his wife, Mercedes Schlapp, director of strategic communications at the White House, walked out of the dinner. “Enough of elites mocking all of us,” he said.

My wife @mercedesschlapp and I walked out early from the wh correspondents dinner. Enough of elites mocking all of us

The annual dinner is a celebration of the First Amendment — or “freedom of the press” — and Wolf saw this as an opportunity to go after Sanders’ appearance and job performance.

Until Saturday night, no one knew Wolf’s name, and now she has only convinced America that she is a bully. What happened to liberals being obsessed with women empowerment?

As Sanders once said, “The only ‘War on Women’ that I see is the one that’s being waged against every woman and every female that is close to this president.”